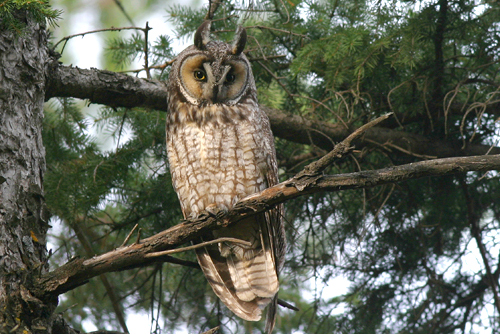 Characteristics and Range The Long-eared Owl is a medium-sized owl with long ear-tufts and an elongated shape, best detected by its series of single hoots, heard mostly on spring nights. This species is migratory with a Holarctic breeding range. In North America, the central boreal forest as far as the James Bay region represents its northern range limit, with breeding occurring south to Arizona in the west and West Virginia in the east. Wintering populations extend south of the breeding range into northern Mexico. It is also widespread in Eurasia and found in parts of Africa.

Distribution, Abundance, and Habitat As with The Birds of Manitoba, the atlas documented this species across the southern half of the province as far north as the Ponton area, but also with an extralimital record near Churchill. The highest detection rates were in the Prairie Potholes, although many of these detections were in the boreal-parkland transition east of Winnipeg and to a slightly lesser extent in the southern Interlake. It is not clear if this reflects a genuine pattern of density or an effect of survey effort, with more early-season surveying in southeastern Manitoba. This species is irruptive and can be remarkably common in the Prairie Potholes during irruptions, such as occurred in spring 2005 after heavy precipitation in the preceding year left much unharvested grain under considerable winter snow cover, resulting in an abundance of voles (pers. obs.). In Manitoba, although this species does occur in relatively isolated aspen groves, some coniferous trees are almost invariably present on breeding territories. This includes shelterbelts and small plantations as well as naturally occurring conifer stands. In Manitoba's boreal forest, it appears to prefer jack pine with small clearings or open meadows for hunting, as well as black spruce and willow swales. Most breeding attempts are in old nests of American Crow or Black-billed Magpie in aspen, willow, or pine (Marks et al. 1994, The Birds of Manitoba).

Trends, Conservation, and Recommendations The Long-eared Owl is abundant and widespread and not of conservation concern. Nonetheless, different populations face a variety of threats including loss of riparian habitat (western U.S.A.), urban expansion, agricultural intensification, forest succession, population expansion of larger owls, nest availability, and pesticides (Marks et al. 1994). There is some evidence of long-term declines in Manitoba, albeit difficult to interpret (The Birds of Manitoba). Where management is required, planting conifers in open habitats and providing nest platforms can be useful (Marks et al. 1994).