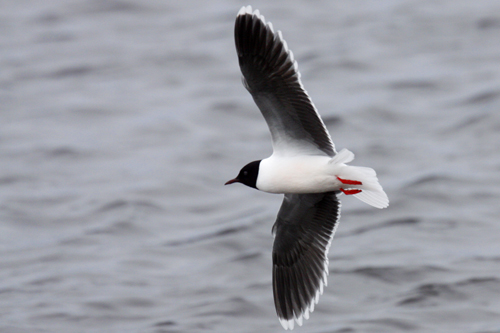 Characteristics and Range The world's smallest gull species, the Little Gull can be recognized by its black hood, pale wingtips, and dark underwings in adult birds. The latter characteristic is eye-catching even at great distances. Although the main breeding range is in parts of Eurasia, small populations exist in North America, primarily around the Great Lakes. Scattered breeding has been recorded elsewhere, notably in the Churchill region of Manitoba. In North America, most wintering birds have been observed along the Atlantic and Pacific coasts, as far south as the Gulf of Mexico, but there are scattered migration records throughout the interior of the continent (Ewins and Weseloh 1999).

Distribution, Abundance, and Habitat Little Gulls were found in eight squares in the Churchill region, where the species has been present annually, and breeding recorded irregularly, since c. 1981 (Jehl 2004). During the atlas period, breeding was confirmed at West Twin Lake, ~30 km southeast of the Churchill town site, and courting pairs were seen elsewhere. Most surprising was the discovery of Little Gulls in three squares along the Gods River northwest of Shamattawa, an area that had seen little, if any, ornithological exploration in the past. These birds were observed on or near river islands where they may have been nesting in association with other colonial gulls and terns (J. Fried, pers. comm.). Although as many as a dozen adults are seen in the Churchill region in most years, the number of nesting pairs is unknown. In the past nests have been found on small hummocks in ponds, low islands in lakes, and on islands in the Churchill River. Most of these locations are in the treeline-tundra transition. Feeding takes place along streams and at ponds, especially where insect hatches are occurring.

Trends, Conservation, and Recommendations The Little Gull is considered a species of Least Concern globally. Its status in North America remains unclear and it may be a recent colonist to this continent (Ewins and Weseloh 1999). Although not listed by COSEWIC, its population in Canada is tiny and certainly not secure, and it is considered a species of regional concern in the Taiga Shield & Hudson Plains (Environment Canada 2013a). Potential threats to Little Gulls in Manitoba include loss of habitat due to climate change and disturbance of nests.