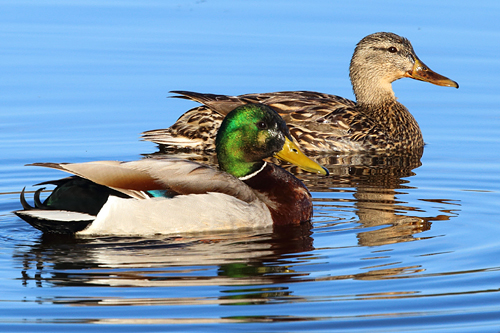 Characteristics and Range This most familiar of ducks is native to much of the temperate Northern Hemisphere and has been introduced elsewhere. Though widespread as a wild bird, it is often found in a semi-domestic state and is the ancestral species for many domesticated duck varieties. The green-headed breeding male and mottled-brown female need little description here, though female and eclipse plumages resemble those of many other dabbling ducks; the white-edged, blue speculum is a feature of all plumages. The Mallard's North American breeding range includes most of Canada, except much of the Arctic (although it breeds in coastal Greenland), and all but the southernmost parts of U.S.A. In winter, it withdraws from most of Canada and Alaska, and extends southward to northern Mexico, the Gulf States, and uncommonly the northern Caribbean islands (Drilling et al. 2002).

Distribution, Abundance, and Habitat As expected, the Mallard was found province-wide; it was detected in more squares and on more point counts than any other duck species, reflecting its adaptability to boreal as well as prairie settings. Abundance was greatest in the Prairie Potholes, locally in the Boreal Taiga Plains (especially near The Pas and in the southern Interlake), and in the immediate coastal portion of the Hudson Bay Lowlands and Arctic Plains & Mountains. Within the boreal forest, numbers were somewhat elevated in a band from the Nelson River headwaters to the western Taiga Shield; subtle differences between computed abundance and probability of observation in this region are difficult to interpret. The degree of bias to abundance estimates by molt migration is uncertain, since the relative importance of local concentration at large wetlands and longer-range northward movements is not clear (Drilling et et al. 2002, Baldassarre 2014). Male-dominated Mallard flocks are often conspicuous in grain fields and wetlands during the June peak of point-counting.

Mallards nest in a variety of grassland, wetland, agricultural, and forested settings, more often in upland sites than over water (Baldassarre 2014). Broods are relatively easy to detect at wetlands and other feeding areas (e.g., farm dugouts, sewage lagoons, beaver ponds, roadside ditches), accounting for the high proportion of squares where breeding was confirmed (36% province-wide).

Trends, Conservation, and Recommendations Long-term BBS trends are slightly upward in Manitoba and slightly downward in Canada, neither trend being statistically significant. Continent-wide population estimates rose from 5.7 million in the mid-1960s to 9.2 million in 2011, with intermediate low periods in 1981-1994 and 2004-2006 (Baldassarre 2014). Periodically, reduced harvest limits have been applied to this much-hunted species (35% of all ducks taken in North America, Baldassarre 2014). Current trends suggest that the level of exploitation is sustainable, while ongoing vigilant management is essential. Threats include the continuing attrition of wetlands by agricultural development (partly offset by restoration and conservation efforts) and reduced productivity and displacement during periodic droughts.