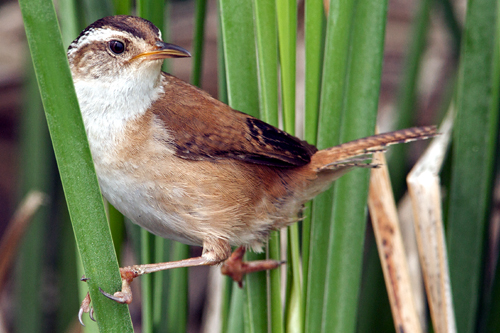 Characteristics and Range The Marsh Wren's complex but unmusical song is a summer feature of Manitoba's larger, deep-water marshes. Though usually well concealed in tall emergent vegetation, this wren may pop up briefly onto an exposed perch to inspect an intruder, allowing good views of its relatively long bill, whitish eye-line, and frequently cocked tail. The Marsh Wren occurs in a patchy range across the U.S.A. and southern Canada, excluding a large portion of the southeastern states. BBS data show it reaching peak abundance in the eastern half of the Prairie Potholes. The northern range extremity is near the Alberta-British Columbia border, almost reaching the Northwest Territories. Eastern and western populations may be distinct species, with a breeding-range divide lying between Saskatchewan and Nebraska (Kroodsma and Verner 2013). The winter range includes much of Mexico, milder portions of the western U.S.A. northward to extreme southwestern British Columbia, and coastal regions of the eastern U.S.A. from the Gulf States and peninsular Florida to Chesapeake and Delaware Bays.

Distribution, Abundance, and Habitat Atlas records are concentrated in the Prairie Potholes and secondarily the southern Boreal Taiga Plains, with localized occurrence in the Boreal Hardwood Transition and minimally in the Boreal Softwood Shield.Possible or probable breeding records in 18 squares from the Bloodvein River and the Porcupine Hills north to the Leaf Rapids area, extend the range described in The Birds of Manitoba northward by 500 km, although this species is likely to occur in low density and perhaps erratically this far north. Peak abundance was detected around Lake Manitoba and southern Lake Winnipegosis and in extreme southwestern Manitoba. BBS analysis shows a robust, long-term increasing trend in the Prairie Potholes, including southwestern Manitoba, partly offset by decreases in neighbouring regions including southeastern Manitoba. These changes probably reflect long-period variations in moisture levels, with predominantly wet conditions across southern Manitoba from the 1990s to the present. The key habitat feature is large stands of cattails and other tall emergent vegetation, often in deep-water sections of marshes, bounded by open water. As well as natural wetlands, the Marsh Wren often inhabits strips of cattails at the edges of sewage lagoons.

Trends, Conservation, and Recommendations Overall conservation concern for this species is low, as supported by BBS trends in the core range. The Marsh Wren doubtless benefits from management of marshes for waterfowl production. Managed marsh impoundments are likely of particular importance in prolonged drought periods, when some boreal marshes may also increase in importance. While recent wet years and the proliferation of invasive cattails have combined to assure abundant habitat for Marsh Wrens, the reduction of ongoing wetland drainage and fragmentation remains an important long-term goal for conservation of this and many other species.