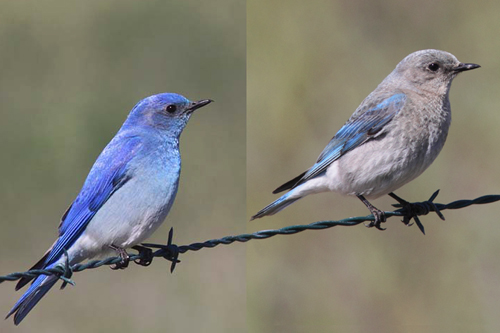 Characteristics and Range The Mountain Bluebird inspires adjectives such as sublime and charismatic, but also aberrant (as a thrush) in the biological sense (Power and Lombardo 1996). Slightly larger and slimmer than an Eastern Bluebird, the adult male Mountain Bluebird is almost entirely sky-blue, while the female is mostly woodsmoke-grey with pale blue highlights in the wings and tail. Some females have a slight rufous wash to the breast, thus resembling drab individual female Eastern Bluebirds. The Mountain Bluebird's breeding range extends from Alaska to southwestern Manitoba (the easternmost limit) and southward through the western plains and mountains (excluding coastal ranges) to northern parts of California, Arizona, and New Mexico. The winter range is comparable in area but more southerly in extent, with limited overlap of breeding range, reaching east to Kansas and Oklahoma and south into northern Mexico (Power and Lombardo 1996).

Distribution, Abundance, and Habitat Atlas records were largely confined to a triangular zone of southwestern Manitoba (western Prairie Potholes) extending north to the Russell area and east to near Morden, with an outlier near Camperville. This species' affinity for nest boxes facilitates detection and explains the large proportion of confirmed nesting records (55% of occupied squares). Computed probability of observation emphasizes the immediate Saskatchewan border region, whereas point counts in only 12 squares were insufficient to compute abundance patterns. The current range represents a significant contraction since publication of The Birds of Manitoba in 2003 (see below). Grassland, including cattle pasture, is the preferred habitat in the western Great Plains including Manitoba; elsewhere, the Mountain Bluebird occupies recently burned or clearcut forest and sparsely treed montane sites.

Trends, Conservation, and Recommendations Historically the Mountain Bluebird extended its range into Manitoba in the 1890s, growing in numbers with the widespread provision of nest boxes from the 1960s onward, though natural cavities are also used (The Birds of Manitoba). Within the second half of the 20th century, the Mountain Bluebird bred regularly in the southern Interlake and occasionally as far east as Whitemouth, with widely scattered occurrence north almost to the Nunavut land border. Recent contraction of its range has coincided with burgeoning numbers of Eastern Bluebirds in southwestern Manitoba. Data archived by the Friends of the Bluebirds indicate Eastern Bluebirds starting to increase in the Brandon region the late 1980s, with Mountain Bluebird decline setting in around 2000. Hybridization of the two species is occasionally reported. Declining numbers of Mountain Bluebirds in Manitoba are part of a general trend throughout the eastern third of its breeding range, partly offset by increases elsewhere, especially in the Great Basin and Northern Rockies (BBS). Changing fortunes of the two Manitoba bluebird species are doubtless linked to long-term changes in climate and especially land use. The continued provision of appropriately designed, placed, and maintained nest boxes favours both species, while intensifying agriculture favours neither, and competitive factors between the two species are perhaps too subtle to manage effectively. Forestry management prescriptions for the Mountain Bluebird that are relevant elsewhere (Power and Lombardo 1996) barely apply in its Manitoba range.