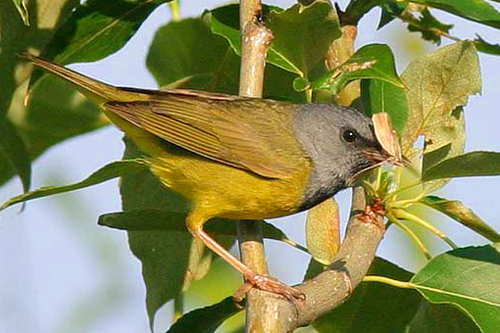 Characteristics and Range The Mourning Warbler is named for its blue-grey hood with a mottled black bib, reminiscent of a mourning veil. It either lacks an eye-ring or shows thin eye crescents depending on sex and age. The underparts are bright yellow in all plumages. Males are often detected by their loud chirry-chirry-chorr-chorr song emanating from dense shrubbery. It nests across the central and southern boreal forest from northeast British Columbia to Newfoundland and south into the Boreal Hardwood Transition around the Great Lakes and locally south along the Appalachian Mountains to West Virginia. It winters from southernmost Nicaragua to northern Ecuador (Pitocchelli 2011).

Distribution, Abundance, and Habitat Atlassers documented the range of the Mourning Warbler extending well north, albeit sporadically, of Lake Winnipeg (The Birds of Manitoba) to the northern edge of the Boreal Softwood Shield, and with two exceptional records in the Taiga Shield & Hudson Plains near Shamattawa and north of Tadoule Lake. This species' distribution in the Prairie Potholes included the Arden Ridge, steep-sided river valleys, and forested islands of the Manitoba Escarpment such as the Turtle Mountains, but excluded the southwestern grasslands and the Red River valley much as described in The Birds of Manitoba. The relative abundance was highest across the southern boreal forest but slightly lower in the Interlake and in the Riding Mountain areas. The relative abundance gradually decreased northward into the central boreal forest and southward into the boreal-parkland transition, becoming lowest in the Prairie Potholes and in the Boreal Softwood Shield north of Playgreen Lake. This general pattern was echœd in the probability-of-observation analysis.

This is a bird of mature deciduous or mixed forest edges with a dense shrub understorey (The Birds of Manitoba). It can also be abundant in dense second-growth vegetation in areas that have been cleared of mature trees such as in roadside ditches, along rights-of-way, and in areas regenerating after logging or fires. It favours areas of poplar and birch saplings with dense shrubbery such as raspberry bushes. Roadside point-count surveys may oversample this species as a result.

Trends, Conservation, and Recommendations Although there is no statistically significant long-term population trend in Manitoba, this species is declining in Canada and survey-wide (Sauer et al. 2015). The problem of roadside bias in BBS described above should be considered for this species. Despite these declines, the Mourning Warbler can benefit from well-managed forestry operations and natural disturbances and is not currently of high conservation concern (Pitocchelli 2011).