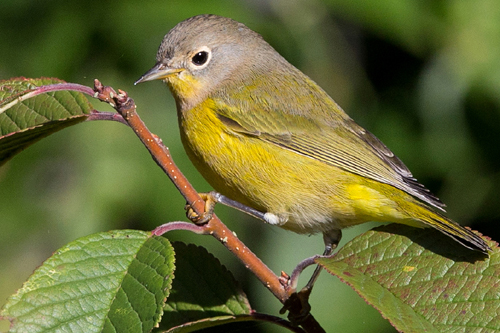 Characteristics and Range With a bright yellow breast and grey head with white eye ring, the Nashville Warbler is a common sight during the breeding season in the boreal regions of Manitoba, but it is more often detected by its two-part song. It breeds in deciduous, mixed-wood, and moist coniferous forests from the Gulf of St. Lawrence and New England west around the Great Lakes and across the southern boreal forest to Saskatchewan. There is an isolated breeding population in the mountainous regions of the Pacific Northwest that may warrant full species status (American Ornithological Society 2017). It winters from southern Texas and Mexico to northern Central America.

Distribution, Abundance, and Habitat In Manitoba, the Nashville Warbler is found in every BCR except the Arctic Plains & Mountains. It is most common (~88% occupied squares) in the Boreal Hardwood Transition where second-growth deciduous and mixed-wood forest is plentiful. This is one of Manitoba's most abundant warblers in the Boreal Hardwood Transition (mean abundance: 0.6 individuals per point count and found in 96% of squares with ≥3 hours of effort), while it is present in lower numbers in the Boreal Taiga Plains (69%), the Boreal Softwood Shield (56%), and rarely in the Prairie Potholes and Taiga Shield & Hudson Plains. Despite this pattern, this is still one of the most abundant warblers within the Boreal Taiga Plains (P. Taylor, pers. obs.). Analyses of relative abundance and probability of observation suggest the highest abundances are in the southern boreal forest, decreasing southward and westward into the boreal-parkland transition and northward into the central boreal forest, for example north of Grand Rapids. As this species is a ground nester, the observed pattern of occurrence may be related to a preference for dense second growth or boggy forests with thick understorey to conceal the nest. Most breeding evidence within the Prairie Potholes occurred along the edges of this BCR, especially the deciduous forested slopes of the Manitoba Escarpment and east to Lake Manitoba. In addition, possible localized breeding was detected in boreal islands such as Birds Hill Provincial Park and the Spruce Woods area, and at a few scattered sites along the Arden Ridge.

Trends, Conservation, and Recommendations The global population is currently considered stable with the majority breeding in Canada (Rosenburg et al. 2016). Like the Chestnut-sided Warbler, logging may have benefited the Nashville Warbler by creating additional second-growth habitat. As long as forested habitats are allowed to regenerate, Manitoba should continue to provide suitable breeding grounds for this species, although its range may begin to shift northward as a result of climate change (National Audubon Society 2015).