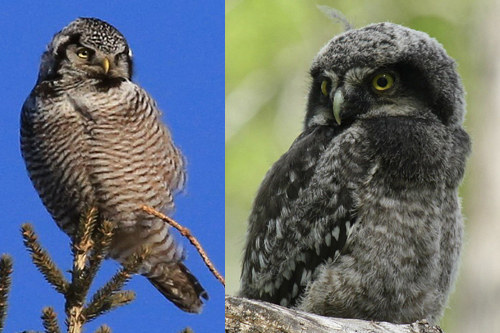 Characteristics and Range This medium (crow-sized), primarily diurnal owl with yellow eyes, contrasting facial markings, and distinctively barred underparts seems fearless of people. Its name is derived from its unusually long tail and falcon-like (fast, deep, and powerful) wing beats. It also glides low over the ground at high speed. It is the only species in its genus and is largely resident in the boreal forest from Alaska east to Newfoundland, and from Scandinavia through Siberia. In some winters, birds move southward into the northern tier of the U.S.A. (Duncan and Duncan 2014).

Distribution, Abundance, and Habitat Atlassers found nesting Northern Hawk Owls throughout the boreal forest and its transition zones, in every BCR except the Arctic Plains & Mountains. The range differs little from that depicted in the The Birds of Manitoba, although there were few detections in the northern portions of the range. As with the Great Gray Owl, this is likely a combination of low densities, nomadism related to prey availability, and limited early-season surveying. There was no confirmed breeding in Riding Mountain National Park, where pairs fledged young in 2009 and 2017; however, possible breeding near Minnedosa and west of Lake Manitoba (where there was successful nesting near Alonsa in 2009) demonstrate at least sporadic summer occurrence in the Prairie Potholes (Kingdon 2017).

The Northern Hawk Owl has been detected on the Manitoba Nocturnal Owl Survey at variable and significantly lower rates (mean of one bird detected every 333 km surveyed; highest annual detection of 1 per 40 km) compared to many other Manitoba owls, and was detected in only 17 of 25 years (1991 to 2015, Duncan 2018). This is in part because it is less conspicuously vocal and more diurnal than most other Manitoba owls. There were insufficient atlas data to analyze relative abundance and probability of observation. When hunting, it perches atop live and dead trees, especially in spruce trees (where it blends in with their topmost cone clusters), but it is inconspicuous in the nesting season (Duncan and Harris 1997). Burned and cut-over forest patches with suitable perches are used by Northern Hawks Owls for up to 20 years until regrowth of vegetation obscures their view of prey. They nests in woodpecker holes or in dead tree stubs near forest edges, in burned or cut-over open coniferous or mixed coniferous-deciduous forests, or in treed muskeg. Small mammals are its main prey but it also occasionally takes grouse-sized birds (Duncan and Duncan 2014).

Trends, Conservation, and Recommendations The Northern Hawk Owl is one of Manitoba's least studied birds, and more basic research on its diet, habitat use, breeding ecology, and dispersal are needed to understand the impacts of forest management and human activity on its long-term survival. Existing citizen science monitoring programs appear to be inadequate to accurately track its population; therefore, a specialized survey protocol needs to be developed.