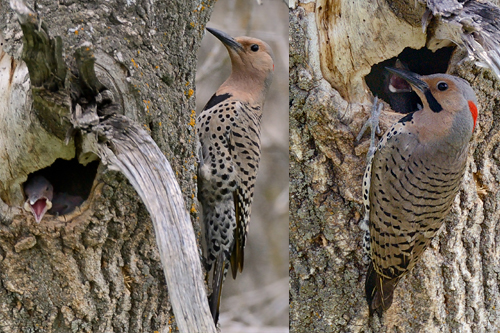 Characteristics and Range This fairly large, mostly brown woodpecker boasts many conspicuous field marks, including black-speckled breast and scalloped back, white rump, colourful primary and tail-feather shafts, and (adult males only) bold black moustache and red nape. Other characteristics include loud, repeated calls and frequent ground-foraging for ants and other terrestrial insects. The eastern, "yellow-shafted" subspecies (C. a. auratus) is the form normally seen in Manitoba, whereas the western, "red-shafted" subspecies (C. a. cafer) and hybrids are rare here. The narrow overlap zone between the two extends from Alaska to the western edge of the Great Plains (Wiebe and Moore 2017). Other subspecies occur at southern range extremities. The overall breeding range extends from Alaska and boreal Canada to Cuba, northern Mexico, and discontinuously to Nicaragua. Fall migration brings southern withdrawal from most of Canada, and winter occurrence in southern Manitoba is rare. The winter range includes some voids in the breeding range in Texas and southern California (Wiebe and Moore 2017).

Distribution, Abundance, and Habitat Atlas records extend throughout Manitoba, except for a forest-tundra transition zone extending well inland from the Arctic Plains & Mountains. Based on atlas records, the extent of this void appears to be slightly overestimated by Wiebe and Moore (2017) and underestimated in The Birds of Manitoba. Atlas records were also relatively sparse in the Red River Valley, where woodland is scarce. Otherwise, occurrence was rather uniform from the Prairie Potholes to the southern Taiga Shield & Hudson Plains, but with greatest abundance in the Boreal Hardwood Transition and southern Boreal Softwood Shield. Though widely distributed in most forest types, the Northern Flicker prefers partly open wooded habitats and forest edges because of its ground-feeding habits. Dead trees and snags, especially aspen, are preferred for nest-cavity excavation; wooden poles are also frequently used, even in heavily forested areas.

Trends, Conservation, and Recommendations BBS data analysis indicates widespread, steady declines for the Northern Flicker, especially the yellow-shafted subspecies. Long-time observers have noted declines in southern Manitoba generally, and especially as a nesting species within the city of Winnipeg (R. Koes, pers. obs.). Suggested causes include competition for cavities with the European Starling and removal of dead trees and snags, which reduces nest-site availability in populated areas (Wiebe and Moore 2017). The Northern Flicker seems vulnerable to collisions with structures and vehicles (Wiebe and Moore 2017), the latter in part because of its habit of dust-bathing on gravel roads and highway shoulders (pers. obs.). Exposure to environmental contaminants appears to be generally low, though pesticide use has been implicated in declines, and former hunting excesses during migration are a thing of the past (Wiebe and Moore 2017). While the Northern Flicker remains widespread and abundant, there is evidently cause for concern, vigilant monitoring, and less zealous removal of dead trees (unless mandated for pest control or safety reasons). The retention of snags and standing trees in clearcuts and burns is especially important, and the Northern Flicker's role as a "keystone" provider to secondary cavity users (birds from bluebirds to Buffleheads and small owls, as well as small arboreal mammals) magnifies the importance of its conservation (Wiebe and Moore 2017).