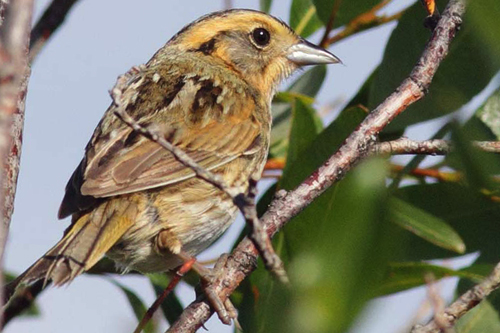 Characteristics and Range Nelson's Sparrow is small and short-tailed with dark brown upper parts, orange-buff facial markings and breast, grey nape, and extensive streaking. The brief, hissing song has been compared to a drop of water hitting a sizzling skillet or a beverage can being opened. Three subspecies breed in disjunct regions: nelsoni in the northern Great Plains, alter on the coasts of James Bay and southern Hudson Bay, and subvirgatus along the Atlantic coast from the Gulf of St. Lawrence to Massachusetts (Shriver et al. 2011). Jehl (2004) thought individuals in the Churchill region resembled nelsoni rather than alter, whereas Rising and Beadle (1996) considered these two subspecies indistinguishable in the field. The closely related Saltmarsh Sparrow has a more southerly U.S. coastal breeding distribution. The winter range of Nelson's Sparrow is also largely coastal, from the Carolinas to peninsular Florida (all three subspecies), along the U.S. Gulf Coast (almost exclusively nelsoni), and rarely in California (Shriver et al. 2011, California Bird Records Committee 2007).

Distribution, Abundance, and Habitat Broadly, this sparrow occurs in the Prairie Potholes, the Boreal Taiga Plains, and the immediate coastal portion of the Hudson Plains & Taiga Shield, with sparse or peripheral occurrence in other BCRs. Atlas records lie mostly within the estimated range in The Birds of Manitoba, but extend northward in the west to include nine squares around The Pas, while two occupied squares north of Churchill extend the coastal range into the Arctic Plains & Mountains, within 50 km of the Nunavut land border. Two records east of Lake Winnipeg, plus other outliers mapped in The Birds of Manitoba, and the Ontario atlas (Coady 2007), suggest sparse (and perhaps irregular) occurrence in suitable habitat in the Boreal Softwood Shield. While fine details of the relative-abundance map are difficult to interpret, it emphasizes the combined basin of lakes Manitoba and Winnipegosis, northward to the Saskatchewan River delta, and a portion of the southwest from Melita, Virden, and Russell to the provincial boundary. The probability-of-observation map favours the extreme southwest more strongly. Overall point-count detection rates are low, reflecting scarcity combined with difficulty of detection. The song may be lost in the din of a marsh dawn chorus, whereas it is more easily detected as prairie winds die down at dusk and into the night. Nelson's Sparrows breed in dense vegetation in wetland settings, including cattail-filled depressions in wet pastureland, edges of large inland wetlands, and coastal marshes.

Trends, Conservation, and Recommendations Shriver et al. (2011) noted that Nelson's Sparrow has suffered acute habitat loss from destruction of coastal marshland and continued drainage of inland grassland, stating further "the conservation of extensive tidal marsh and interior northern grasslands is critical to the stabilization of the species". Nevertheless, BBS data analysis indicates increasing trends in a large portion of the northern Great Plains, including Manitoba and North Dakota, likely a reflection of recent decades of high water levels. Currently, the species is of conservation concern only in the U.S.A. and peripheral Canadian portions of the range (Cooper and Beauchesne 2004, Hodgman et al. 2002, Maine Department of Inland Fisheries and Wildlife 2016, North Dakota Game and Fish Department 2016, Minnesota Department of Natural Resources 2018). Targeted monitoring and further assessment of this inconspicuous sparrow in Manitoba is recommended; confirmation of the subspecific identity of the Hudson Bay coastal population is desirable.