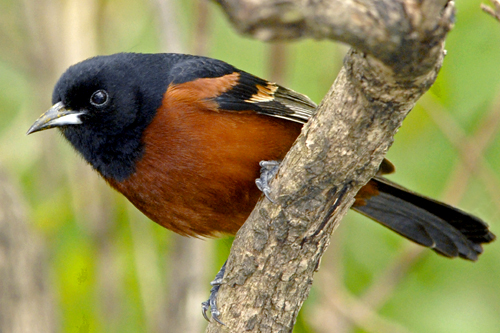 Characteristics and Range Less famous than the Baltimore Oriole, this is North America's smallest and most distinctly coloured oriole. Males are unmistakable with their chestnut underparts, wing highlights, and rump, contrasting with a black hood and back. Females and young males are lemon-yellow and grey, lacking the orange hues of similar plumages of the Baltimore Oriole. The Orchard Oriole nests across the eastern deciduous forests and open parkland habitats (including orchards) from New England to eastern Saskatchewan, south to Florida and central Mexico. It winters from central Mexico through Central America to extreme northern South America (Scharf and Kren 2010).

Distribution, Abundance, and Habitat The atlas documented a range that is comparable to that described in The Birds of Manitoba, with a core in the Prairie Potholes and somewhat limited occurrence in the neighbouring Boreal Taiga Plains. Confirmed and probable breeding in four squares in the Interlake from Ashern to Lake St. Martin, as well as possible and probable breeding in six squares in the west around Dauphin, suggest that nesting might be regular in this outlying range where the species was depicted as a "rare migrant or visitor" in The Birds of Manitoba. Well over 100 km north of these records, a single singing male that was found east of Red Deer Lake is exceptional. Relative abundance peaked in two broad areas: the southwest corner as far east as Glenboro (though not in the heavily wooded Turtle Mountains) and the Red River valley, mostly west of the Red River and south of the Assiniboine River, but also extending north to Lake Manitoba in slightly lower numbers. Probability of observation follows a similar pattern but peaks noticeably in the southwest corner. The near-absence of records from any sections of the Manitoba Escarpment and the low numbers recorded along the well-wooded Arden Ridge, which creates the separation in the two areas of peak abundance described above, are testament to this species' preference for open terrain with a few treed copses or open woodlands. The Orchard Oriole can be seen in open habitats, which explains the higher probability of observation in the southwest corner. It also nests in riparian strips, shelterbelts, farmyards, rural towns (including the outskirts of the cities), aspen parkland, oak savannah, and other light woodlands or edges (pers. obs., Scharf and Kren 2010). It generally avoids coniferous forests and records in boreal forest are rare and restricted to deciduous habitats or artificial openings.

Trends, Conservation, and Recommendations The Orchard Oriole's history in Manitoba, at the edge of its range, is a little unclear. Although not detected here until 1921, it may have been previously overlooked; however, there was a well-documented expansion and establishment starting in southwestern Manitoba in the 1960s and 1970s (The Birds of Manitoba). BBS results suggest this species is increasing here and in Canada overall, which lends further support to the hypothesis of northward expansion. This species has nonetheless suffered from habitat loss, especially in riparian contexts or from loss of orchards, in other parts of its range (Scharf and Kren 2010). The Orchard Oriole is often found along roads and rights-of-way, which can be a source of mortality (Scharf and Kren 2010).