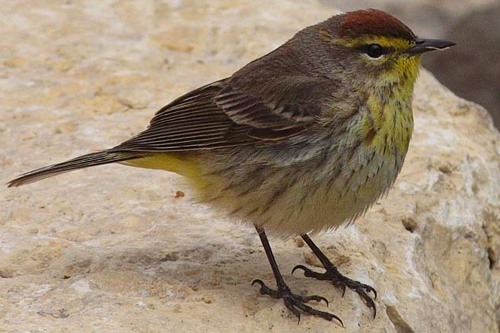 Characteristics and Range Both sexes of the "brown" western race of Palm Warbler in breeding plumage are streaked greyish brown with a yellow throat and undertail coverts and a rufous crown; the eastern race has more extensive yellow and rufous markings. The species is a ground feeder and nester, often recognized by frequent tail-wagging. The male delivers his buzzy, trilled songs from elevated, often conspicuous perches. A short-distance migrant, the Palm Warbler typically arrives a little earlier in spring and departs a little later in fall than most wood-warblers. It breeds from northeastern British Columbia and south-central Northwest Territories to Atlantic Canada, reaching the northern U.S.A. near the upper Great Lakes and in northern New England; the boundary between eastern and western races is near the Quťbec-Ontario border. The main winter range is in coastal areas of southeastern U.S.A. (especially peninsular Florida), the YucatŠn peninsula, and the northern Caribbean; a few Palm Warblers winter on the Pacific Coast from California to Washington (Wilson 2013).

Distribution, Abundance, and Habitat The Palm Warbler was detected almost throughout boreal Manitoba, including extreme northwestern areas beyond the previously estimated range limit in The Birds of Manitoba. Computed relative abundance and probability of observation were greatest in a broad band across the northern half of the boreal forest, extending southward on the east side of Lake Winnipeg, and locally in the northern Interlake. The species was found in about one-half of surveyed squares in the Boreal Softwood Shield and one quarter in the Boreal Taiga Plains and Taiga Shield & Hudson Plains combined, but was scarce or absent in much of the Manitoba Escarpment, except for lowland edges of the Porcupine Hills and Duck Mountains. The Palm Warbler's preferred breeding habitat is open peatland, ranging from small bogs to extensive fens and heaths, with scattered trees and coniferous copses (especially black spruce and tamarack); it also occupies regenerating, open burned areas of coniferous forest. The scarcity of Palm Warbler records in the Boreal Hardwood Transition is perhaps exaggerated by the inaccessibility (rather than lack) of suitable habitat. The nest is usually located in Sphagnum moss at the base of a small conifer (Wilson 2013).

Trends, Conservation, and Recommendations The low overall conservation concern for the Palm Warbler is supported by its widespread occurrence, especially in remote regions with stable boggy habitat. The downward population trend in Manitoba, based on BBS data, is statistically significant but low in reliability, because of sparse data and inadequate coverage of the core range. Also, local numbers on individual BBS routes may decline with ongoing post-fire and post-logging habitat succession (pers. obs.). The Palm Warbler is sensitive to peat mining, in part because of increased nest predation in disturbed areas (Wilson 2013). At present, peat exploitation is mostly localized at the southern fringe of the Palm Warbler's range in Manitoba, but the species should be considered in peatland management. The Palm Warbler is one of the birds most frequently killed by collision with tall, lighted structures during migration (Wilson 2013), and should benefit from any measures to reduce tower kills.