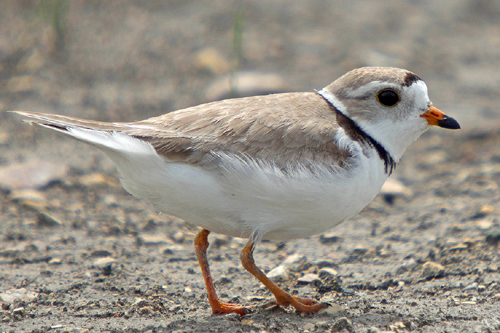 Characteristics and Range Two-thirds the size of its relative the Killdeer, the Piping Plover is a sandy-coloured shorebird that is well camouflaged on beaches and alkali flats. It is similar in size and pattern to the much darker, northern-nesting Semipalmated Plover, but lacks the black lores and ear coverts. Two ecologically different subspecies are generally recognised, the nominate nesting along the Atlantic coast from Newfoundland to North Carolina, and the circumcinctus (interior) subspecies (usually with a more complete black breast band) from eastern Alberta to Lake of the Woods and south to Kansas, with small disjunct populations around the Great Lakes. The former winters primarily along the Atlantic coast from North Carolina to Florida and some Caribbean islands, whereas the latter winters mostly along the coast of the Gulf of Mexico (Elliott-Smith and Haig 2004).

Distribution, Abundance, and Habitat Confirmed breeding during the atlas period was limited to one nesting pair on Lake Winnipeg in 2010 and two failed nesting attempts at Whitewater Lake in 2012. This is the result of continual decline since the 1970s and 1980s and a greatly reduced range from that depicted in The Birds of Manitoba. This decline is largely due to the absence of wide, sparsely vegetated, sandy beaches, where this plover's camouflage is effective. Suitable nesting habitat on Manitoba's great lakes is a product of wide fluctuations in lake levels, with high water scouring vegetation (preventing encroachment) and low water exposing wide beaches where the plovers can nest above the strandline. The current near-absence of such habitat follows stabilised lake levels (controlled by the Lake Winnipeg Regulation) and two decades of above-average precipitation and high water. Former sites with multiple pairs such as the Shoal Lakes are now covered in cattails or deep water. For this reason, large gravel parking lots near lakes, and even partially washed-out gravel roads, have become substitute habitat, but here and elsewhere human disturbance poses problems. Since the atlas period, a renesting effort fledged three young near Lake Manitoba in 2016, thanks in large part to a dedicated group of volunteer site "guards", and in 2017 a pair fledged at least one young at Whitewater Lake.

Trends, Conservation, and Recommendations As recently as the 1980s, over 200 Piping Plovers were counted on annual surveys in Manitoba. Now this small plover teeters on the brink of extirpation here. The Piping Plover is listed as Endangered in Manitoba, Canada, and the U.S.A., and is globally Near-threatened. The international census conducted every five years shows a 23% decline in the interior subspecies from 1991 to 2011 (COSEWIC 2013a). Although the results of the 2016 census have not yet been published, there is indication of recent modest increases in the Great Lakes region (U.S. Fish and Wildlife Service 2018). Human "guarding" of plover-nesting beaches and other intensive conservation strategies are now practiced in many areas. Nonetheless, unless more natural water fluctuation patterns are permitted, the likelihood of recovery in Manitoba is slim and intensive conservation effort is required to safeguard the few pairs that persist in marginal habitat.