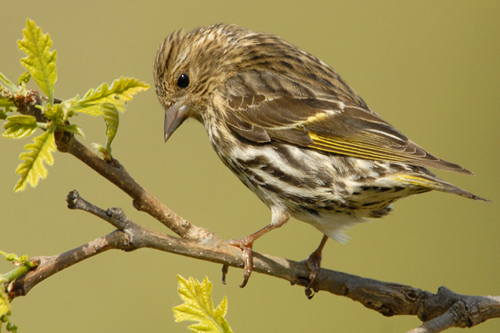 Characteristics and Range The Pine Siskin is a diminutive finch, with streaky brown plumage, highlighted in the male by a yellow wingbar and yellow in the primaries and tail. The female is similar, but usually has a white wingbar. The bill is longer and more slender than in most finches. Flocks of siskins tend to be active and vocal. Pine Siskins breed from near the treeline in Alaska across the continent to Labrador and Newfoundland, and south through the mountains of western North America as far as Mexico and Guatemala, but only as far south as the Great Lakes in the eastern part of the breeding range. They winter from southern Alaska and Canada through most of the conterminous U.S.A. and parts of Mexico (Dawson 2014).

Distribution, Abundance, and Habitat The Pine Siskin was found considerably farther north than is shown in most references (Dawson 2014, Dunn and Alderfer 2011). It also occurred farther to the northeast than mapped in The Birds of Manitoba, but this likely reflects coverage of areas where data were lacking in the past. It was found in 40% of surveyed squares in the Boreal Hardwood Transition, while occupancy was below 27% in other boreal BCRs and lower still elsewhere. Relative abundance was highest in the Boreal Taiga Plains, diminishing both to the southwest and the northeast; it was particularly high along the Manitoba Escarpment in the Duck Mountains and Porcupine Hills and in the extreme southeast. Abundance was also somewhat high in the Interlake and in areas east and north of Lakes Winnipeg and Winnipegosis. Preferred habitat consists of coniferous or mixed forests, where tamarack and cedar seed crops are major food sources. In the Prairie Potholes the species is associated with coniferous trees in towns, suburbs and farmyards (pers. obs.). Within these habitats, and on the wintering grounds, numbers vary greatly from season to season or from year to year. Irruptions are related to variations in distribution and abundance of seed crops (Dawson 2014).

Trends, Conservation, and Recommendations Although reliability is low to medium in most areas, in part due to the species' nomadism, the Pine Siskin shows a long-term declining trend in Manitoba, Canada, and most of its range (Sauer et al. 2015). There are many possible causes of decline, including the clearing of coniferous and mixed forests, and lesser factors such as contamination, collisions, and severe weather events (Dawson 2014). Significant die-offs from salmonellosis of thousands of Pine Siskins congregating at feeders occurred in western North America from 1992 to 1994; these outbreaks pose an ongoing threat throughout the range (Dawson 2014). Management recommendations include careful forestry planning and the establishment of mixed-wood parks (Dawson 2014).