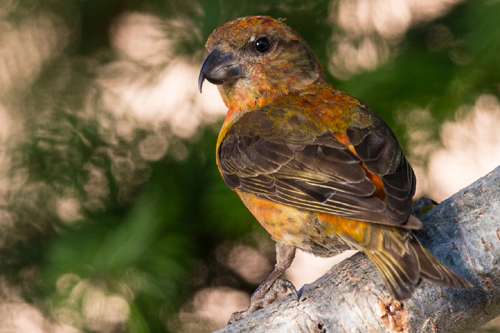 Characteristics and Range Crossbills are medium-sized finches with elongated, crossed mandibles that enable seed extraction from cones. The Red Crossbill, rarer of the two species in Manitoba, is mostly red (male) or greenish (female) with dark wings and tail, no wingbars, and minimal facial markings. Inconspicuous at rest or when feeding, Red Crossbills are usually detected by the repeated flight calls of passing individuals or flocks. Detailed studies have revealed up to ten distinct North American forms of Red Crossbill, known as Types 1 to 10, identifiable with difficulty by a combination of flight calls, body size, and bill size and shape adaptation to preferred conifer species (Adkisson 1996, Young 2012). Type 9, endemic to southern Idaho, was recently recognized as a distinct species, Cassia Crossbill (Loxia sinesciuris), but otherwise taxonomic relationships are unsettled.

Distribution, Abundance, and Habitat Each Red Crossbill type has a core distribution, but several have a proclivity for long-distance wandering in response to suitable cone availability. Collectively their breeding range extends across southern boreal, northeastern temperate, and western montane forests from Canada and southern Alaska through the Western Cordillera to Mexico and Nicaragua, with local occurrence in the Appalachians. Non-breeding movements reach much of the central and eastern U.S.A. except the coastal plain (Adkisson 1996). The species also occurs (with additional types and recent or potential splits) widely in Eurasia and locally in North Africa. Small-billed Type 3 Red Crossbills breed primarily in the Pacific Northwest, but irrupt eastward through Manitoba and potentially breed here. Type 2, a large-billed pine specialist, is known to breed in Ontario (Simard 2007), and may well nest in Manitoba. The status of other types in Manitoba is uncertain.

An "historic flight" of Red Crossbills, mostly Type 3, extended eastward across the continent to Québec, New England, and Georgia in 2012 (Brinkley 2013, Young 2012). This movement accounted for the majority of atlas records in southern Manitoba, as well as the elevated detection rate (12% of squares) in the Boreal Hardwood Transition (though some possible breeding records may refer to non-breeding individuals). Most northern records, however, were in 2010 and 2013. Overall, sparse detection extended over much of the boreal forest, comprising <5% of squares in the Boreal Softwood Shield and Boreal Taiga Plains, with barely 1% in the Taiga Shield & Hudson Plains (concentrated near the Nelson River) and the Prairie Potholes. The probability of observation is uniformly low across most of Manitoba and negligible along the Hudson Bay coast and in the western Prairie Potholes. Sporadic occurrence precluded meaningful abundance mapping. Atlas records rarely exceeded the minimum level (H: presence in suitable habitat), and there was just one confirmation (FY: fledged young) southwest of Lynn Lake in 2011. There are a few previous confirmed breeding records in southern Manitoba (The Birds of Manitoba). Singing Red Crossbills at Landmark in February 2010 furnished one of the very first atlas records, and reflected the remarkable ability of crossbills to breed in the winter months, timed to take advantage of cone abundance.

Trends, Conservation, and Recommendations Due to the Red Crossbill's sparse and unpredictable occurrence in Manitoba, BBS and CBC data do not yield any useful trend information, and no management recommendations can be made. Concerns elsewhere include widespread declines in the northwestern U.S.A. and adjacent parts of Canada (likely affecting the magnitude of irruptive movements in Manitoba), and scarcity of Type 8, the Endangered "Newfoundland crossbill" (L. c. percna).