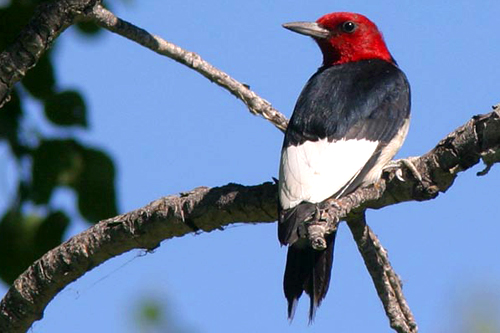 Characteristics and Range This distinctive species is set apart from all other woodpeckers by its entirely red head and neck (in adults) and large white wing patches. The Red-headed Woodpecker breeds across the deciduous forests of the eastern two-thirds of the U.S.A. and locally across southern Canada from Saskatchewan to Quťbec south of the boreal forest. Canadian and northern U.S. populations are migratory and winter from northeastern Texas to New York, but the extent of migration is somewhat dependent on oak and beech mast (Frei et al. 2015). Overwintering is rare in Manitoba but has been recorded sporadically since the 1930s (The Birds of Manitoba).

Distribution, Abundance, and Habitat In Manitoba, this woodpecker is strongly associated with mature aspen and aspen-oak woodlands that have a sparse shrub layer and some standing snags or dead limbs. Its preference for open understorey, linked to both aerial flycatching and ground foraging, means that it is often found in grazed woodlots and treed cattle yards and may be semi-colonial in such habitats (Harris 2004). The low probability of observation is a product of this clumped distribution. Although this species is not well surveyed by the point count method, its peak abundance follows the boreal-parkland transition (due to its reliance on deciduous woods), with the highest densities in the Boreal Taiga Plains east of Winnipeg from Beausejour to the Minnesota border and in the south-central Interlake, as well as the transition between the Boreal Taiga Plains and the Prairie Potholes in the Westlake Plains, especially the eastern edge of Riding Mountain National Park. Abundance decreases sharply toward the boreal forest and the Prairie Potholes, where suitable deciduous stands are more scattered.

Trends, Conservation, and Recommendations Although the density of this species probably increased in Manitoba in the early 20th century, it has decreased since the 1970s (The Birds of Manitoba). BBS data show a decline in Canada since the 1970s but there is no significant trend in Manitoba due in part to the small number of routes here. It is now listed as Threatened both nationally under the Species At Risk Act and provincially under the Endangered Species and Ecosystems Act. The main threats include: habitat loss, including removal of dead wood; reduction of beechnuts in winter range; vehicle collisions; and pesticides (COSEWIC 2007a). The Red-headed Woodpecker was formerly a frequent visitor to parks and riparian corridors in Winnipeg but has rarely been observed there recently, probably due to snag removal and pesticide usage. Marked reduction has also been noted at the eastern fringe of the Manitoba range (P. Taylor, pers. obs.). This species competes with the European Starling for nesting cavities (Frei et al. 2015) and could benefit from invasive species removal or population control.