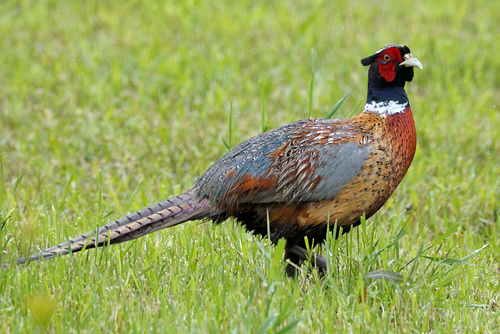 Characteristics and Range The Ring-necked Pheasant is distinctive by shape, with a long, pointed tail in both sexes (longest in males), though some care is required to distinguish the hen pheasant from the Sharp-tailed Grouse. The cock pheasant's colourful head, intricate and iridescent body plumage, and white neck ring are unmistakable. From its origins in Asia, this well-known pheasant has been introduced around the world. It is resident in a band across the northern conterminous U.S.A. and southernmost Canada, especially within the Great Plains, and with various disjunct populations as far south as Texas (Giudice and Ratti 2001). Although released or escaped Ring-necked Pheasants can be seen anywhere in southern Manitoba, the southwestern corner of our province, with the mildest winters, is probably the only area with a self-sustaining population.

Distribution, Abundance, and Habitat Atlas results show the stronghold of the Ring-necked Pheasant to be in extreme southwestern Manitoba, much as described in The Birds of Manitoba. Some of the more eastern atlas records at the level of possible breeding, for example near Carberry, may involve recently released birds, hence the precise range limit is difficult to document. The Ring-necked Pheasant is found in hay and alfalfa, standing crops and stubble, and adjoining shrubby areas. The Gerald W. Malaher Wildlife Management Area near Melita, with a mosaic of open areas and planted conifers and fruit-bearing shrubs, appears to be one of the hotspots for this species. This may be due to the species' use of light woodlands and edges, in this case the shrubs and conifers, which presumably provide overhead cover for roosting and foraging in winter.

Trends, Conservation, and Recommendations There is no population concern for this introduced species in North America. Conversely, the Ring-necked Pheasant has posed problems, with negative population consequences in some areas, for native gallinaceous birds and other ground-nesting birds, especially the Greater Prairie-Chicken, by parasitizing their nests, aggressive behaviour, disease transmission, and competition for food and habitat (Giudice and Ratti 2001). The small population here may be supplemented by dispersing birds from the large population in North Dakota; however, Manitoba's severe winter is likely a key factor limiting this pheasant to the southwest corner (The Birds of Manitoba), so their range could expand in future with climate change.