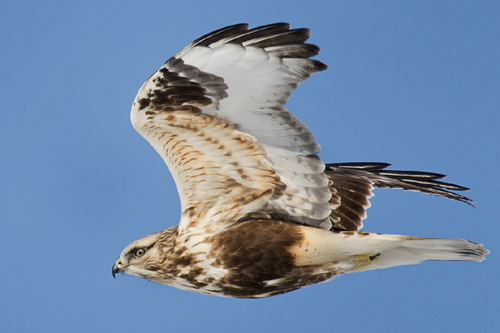 Characteristics and Range Somewhat longer-winged and longer-tailed than a Red-tailed Hawk, the Rough-legged Hawk is primarily known as a migrant in Manitoba. As with other buteos, the plumage is highly variable, depending on the bird's age, sex, and colour morph. While helpful field marks on many birds include dark belly band, tail band and "wrists", identification is best based on a combination of plumage, structural, and behavioural clues. Dark-morph birds are fairly common on migration, but are not known to breed in Manitoba. The species breeds across North America and Eurasia, almost entirely north of the treeline. In North America, the winter range occupies the extreme south of Canada, including occasional individuals or small concentrations in Manitoba, and most of the conterminous U.S.A.

Distribution, Abundance, and Habitat All breeding season atlas records, 10 in total, came from the Taiga Shield & Hudson Plains and Arctic Plains & Mountains, with the only confirmed nesting record taking place in Wapusk National Park. During the 1930s and 1940s, and again in the late 20th century, the species nested commonly in the Churchill area (Jehl 2004). During these periods, lemmings and voles, the species' main prey, were abundant. Nests were frequently placed on structures such as the town's elevator, a launch tower at the rocket range, and the Ithaka shipwreck, as well as on coastal cliffs. Elsewhere, nests are typically placed on steep sides of outcroppings and cliffs, or on exposed hilltops in open country; tree nests are rare. The breeding habitat is described as low-lying areas of the treeline-tundra transition, treeless tundra, uplands and alpine regions. Forested tundra and taiga are apparently only used when prey is abundant (Bechard and Swem 2002).

Trends, Conservation, and Recommendations Pesticides and other contaminants do not appear to be major causes of mortality, but shooting, trapping and highway mortality are still major threats in the winter range (Bechard and Swem 2002). Few, if any, threats have been recorded in the breeding range, although increased oil and mineral exploration may be of future concern (Bechard and Swem 2002). Breeding in Manitoba is too sparse and sporadic for specific conservation recommendations to be made.