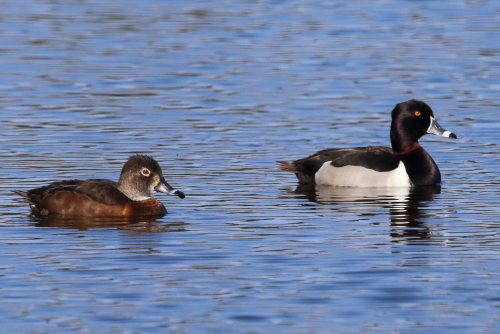 Characteristics and Range This dark-backed scaup relative is distinguished by its strongly peaked head profile, dark back, and striking bill pattern (many people prefer to call it "ring-bill"). The breeding male Ring-necked Duck is mostly black and grey, with purple iridescence on the head, while the female has subtle gradations of grey and brown. The breeding range extends from Alaska and Yukon to Newfoundland and Labrador, southward to parts of the northern tier of the conterminous U.S.A. and locally in the west to Arizona. The zone of greatest abundance is a broad belt from northern Alberta through central Manitoba to southern Ontario (Roy et al. 2012, Baldassarre 2014). The winter range occupies much of the southern U.S.A., northward in the west to parts of British Columbia and in the east to Cape Cod, and southward to Mexico, the Greater Antilles, and locally through Central America (Roy et al. 2012).

Distribution, Abundance, and Habitat While this duck is widespread and easily found in Manitoba, the probability-of-observation analysis suggests it is detected most frequently in the Boreal Softwood Shield, with the area of highest detection extending north into the southern edge of the Taiga Shield & Hudson Plains and south along the Manitoba Escarpment and some parts of the Interlake. This pattern may however be enhanced by frequent detections in roadside ditches in the central boreal forest. Overall abundance and detection were almost equally high in the Boreal Softwood Shield, Boreal Taiga Plains, and Prairie Potholes, markedly lower in the Boreal Hardwood Transition and the Taiga Shield & Hudson Plains, and minimal in the Arctic Plains & Mountains. Observations were scarce in intensively farmed regions and, surprisingly, in a large zone west of Lake Winnipegosis. Publications differ as to the northern extent of the Manitoba breeding range, some showing it province-wide (e.g., Baldassarre 2014) and others excluding a broad northern zone (e.g., Roy et al. 2012). Atlas records extend to the coast, including observations from small aircraft in the Taiga Shield & Hudson Plains. The most northerly confirmed breeding records were near Split Lake and Ilford, and it is possible that the coastal lowland records involved mostly moulting birds. Moult migration is poorly understood for this species, partly because concentrations are relatively small; Lake Winnipegosis is one historic moulting area (Roy et al. 2012, Baldassarre 2014). Jehl (2004) considered most Ring-necked Ducks at Churchill to be moult migrants, based on the preponderance of males.

Trends, Conservation, and Recommendations This species has prospered over the last 60 years, with widespread population increases and range expansion (Roy et al. 2012, Baldassarre 2014), notably in the Prairie Potholes from Saskatchewan to Minnesota (BBS data). Reasons for the contrasting positive trends of this species with the declining trend of its relative the Lesser Scaup are poorly understood, but conservation and management concern for the Ring-necked Duck appears to be justifiably low.