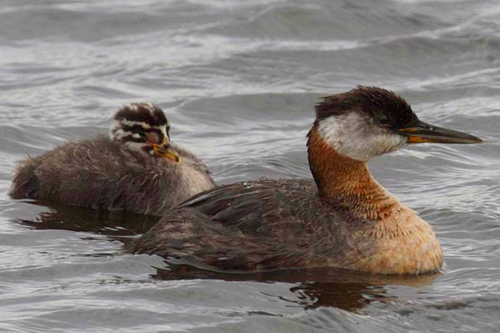 Characteristics and Range During the nesting season the Red-necked Grebe has a long chestnut-red neck, a large white cheek patch, and a greyish upper body and frequently betrays its presence with raucous braying calls that end in a horse-like whinny. A circumpolar inhabitant of northern waters, in North America it nests from Alaska east across the boreal forest south of the treeline to extreme western Québec (though scarce in Ontario) and south to Montana and the aspen parklands of Minnesota. It winters along the northern Atlantic and Pacific coastlines and in Lake Ontario (Stout and Nuechterlein 1999).

Distribution, Abundance, and Habitat Atlas results match The Birds of Manitoba's description of the Red-necked Grebe occurring primarily in the southern half of the province and especially common in the west. Nonetheless, numerous records in the northern Boreal Softwood Shield and two in the Taiga Shield & Hudson Plains (Cochrane River and near Herchmer) suggest a breeding distribution as far north as ~58.3°N. This grebe was formerly a bird of the aspen parklands and southern boreal forest in Manitoba, especially common in the Turtle, Duck, and Riding Mountain parks. The large number of nesting records and high abundance in the western half of the Prairie Potholes is a recent phenomenon (since the late 1990s, pers. obs.). This increase in western Manitoba was evidenced by the percentage of squares in which this species was detected per atlas region: highest in the southwest (Region 1: 55%) and west (Region 7: 30%, Region 8: 20%) as compared to south-central regions (11-14%) and eastern regions (4-7%). Even in the central north, the pattern persisted with the central northwest (Region 11: 9%) having higher detection percentages than other northern regions (0-2%). Although grebes are not well surveyed by point counts, relative abundance shows a broadly similar pattern of hotspots in the west, particularly along the Manitoba Escarpment, with a band of lesser concentrations along the border of the Boreal Taiga Plains and the Boreal Softwood Shield (also east towards the Ontario border). In Manitoba, the Red-necked Grebe nests on shallow, medium-sized (>2 hectares) lakes or protected bays of larger lakes. The nest is a floating platform of decayed vegetation anchored to emergent vegetation, sticks, or sometimes anchored to submergent vegetation in smaller lakes (De Smet 1983).

Trends, Conservation, and Recommendations In the 1970s and 1980s, the Red-necked Grebe was apparently declining and considered a species of concern (De Smet, K. D. 1982. Status report on: the Red-necked Grebe (Podiceps grisegena) in Canada. Ottawa, ON: Committee on the Status of Endangered Wildlife in Canada. Close COSEWIC 1982, Tate and Tate 1982) but atlas data show strong increases since that period. This increase is dramatic in the Prairie Potholes and especially noticeable in the Minnedosa potholes, where Red-necked Grebes appear to have taken over many former Horned Grebe nesting ponds (pers. obs.). Long-term BBS data suggest stability in Manitoba, Canada, the Prairie Potholes, and survey-wide, but this is a product of declines in the early decades of the BBS buoyed by recent increases in many regions (Sauer et al. 2017). These increases may be partly explained by wet conditions in our region over the past two decades. The Red-necked Grebe is susceptible to pollutants, especially in coastal wintering areas where high levels of organochlorines, mercury, and other heavy metals occur (De Smet 1987, Forsyth et al. 1994).