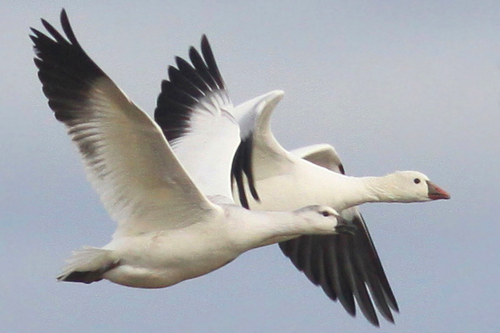 Characteristics and Range At two-thirds the size of a Snow Goose, Ross's Goose is barely larger than a Mallard. It has a shorter and thicker neck than the Snow Goose and a shorter bill, which lacks a distinct "grinning patch", but is otherwise very similar. A dark (blue) morph of the species is extremely rare—it has been reported in the province only a handful of times—and might be a result of hybridization with Snow Geese (Jˇnsson et al. 2013). Ross's and Snow Geese often occur together on the breeding grounds, during migration, and on the wintering grounds. During migration, family parties of Ross's Geese are often found at the periphery of Snow Goose and Canada Goose flocks. Ross's Goose is primarily a High Arctic breeder, with largest numbers in the Queen Maud Gulf area and smaller colonies elsewhere in the Canadian Arctic and along the south and west shores of Hudson Bay. Most Ross's Geese winter in the Central Valley of California, but increasingly they are also found in south-central U.S.A. and northern Mexico (Jˇnsson et al. 2013).

Distribution, Abundance, and Habitat Only four surveyed squares were occupied, all in the vicinity of Cape Churchill (Taiga Shield & Hudson Plains). No confirmed breeding was reported. A large mixed Snow Goose and Ross's Goose colony at La PÚrouse Bay was not visited during the atlas period, however, which no doubt resulted in the under-reporting of this species as a breeder in the province. Ross's Goose had first been found nesting there in 1972 and by 2003 perhaps 1,000 pairs were present (Jehl 2004). Breeding habitat consists of sparsely vegetated islands, areas around shallow lakes, and occasionally riparian habitat, above the treeline, often with Snow Geese (Jˇnsson et al. 2013). Increasing numbers are found in marshes and cropland in southern Manitoba during migration.