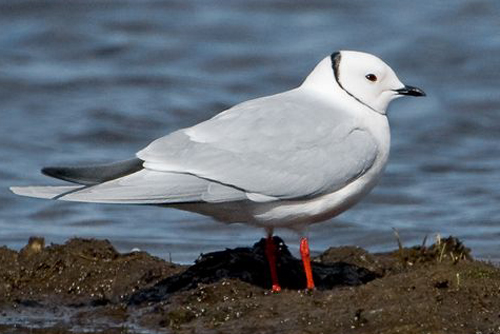 Characteristics and Range The allure of Ross's Gull is due in part to its rarity, as it usually occurs in inaccessible locations in and near the Arctic, and also to its delicate beauty. This is a small gull with mostly white plumage, at times with a pink wash on the underparts, pearl-grey underwings and a narrow black band around the neck. Most Ross's Gulls breed in Siberia, but occasional breeding has been documented in scattered locations in northern Canada and elsewhere. The species is thought to winter primarily in Beringia, with small numbers probably wintering in the Labrador Sea (Matfei et al. 2015).

Distribution, Abundance, and Habitat Although no breeding evidence of this species was obtained during the atlas period -indeed, no birds were sighted- there is recent breeding history and future potential for the species. From 1978 to 2007, with the exception of 1979, birds were present annually in small numbers in the Churchill area and during these years a number of nests were found, the first in 1980 (Chartier and Cooke 1980). Overall breeding success was believed to be low, due to factors mentioned below (The Birds of Manitoba). Nesting habitat consisted of small islets or tufts of vegetation in shallow ponds, while feeding took place along the river, in meltwater ponds along the shore of Hudson Bay, at the Churchill granary ponds and elsewhere. No sightings were reported from 2006 to 2015, but on 13 June, 2016 a single bird was seen along the Churchill River south of Churchill, raising hopes that the species may return as a breeder or that some may still nest in a remote area.

Trends, Conservation, and Recommendations While the Ross's Gull is considered a species of Least Concern globally, due in part to its large and mostly inaccessible range, in Canada it has been designated as Threatened since 2001. Specific threats are disturbance of breeding birds, inclement weather, predation, habitat changes, and changes in ice and snow patterns associated with climate change (COSEWIC 2007b). Birders and photographers are urged not to disturb the species, if it were to return.