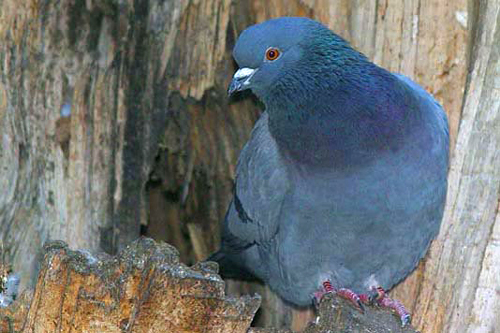 Characteristics and Range Also known as "rock dove" or simply "feral pigeon", the Rock Pigeon was first domesticated by the ancient Egyptians ~4,000 years ago (Shapiro and Domyan 2013). It has long been used by humans for carrying messages, racing, and show aviculture (Lowther and Johnston 2014). Larger than the Mourning Dove, pigeons are generally bluish-grey with a double black band across the wings, although a variety of captive-bred forms with different colour patterns are sometimes seen in Manitoba. Originally, this pigeon nested on cliffs throughout southern Europe, North Africa, the Middle East, and South Asia but it is now cosmopolitan following releases of domesticated birds in many other regions (Shapiro and Domyan 2016). The Rock Pigeon was first introduced into North America in the 1600s and is now a year-round resident nearly everywhere south of the boreal forest (Lowther and Johnston 2014).

Distribution, Abundance, and Habitat Atlas results show a distribution that is little different from that depicted in The Birds of Manitoba. None were recorded in the Boreal Softwood Shield, even in Thompson, where a flock as large as 50 birds persisted for a decade in the mid 1980s (The Birds of Manitoba), except for an outlier in Flin Flon, 200 km north of the apparent contiguous range limit near Swan River. Relative abundance peaked in the Prairie Potholes (but was lower in more wooded areas such as immediately south and east of Riding Mountain), a few adjacent areas such as Red River valley from Winnipeg south to the U.S. border, and the fertile Swan River valley. The areas of highest abundance and probability of observation correspond to large settlements and intensive agriculture, where this pigeon is associated with towns, buildings, bridges, grain elevators, rail yards, and farm yards.

Trends, Conservation, and Recommendations Although the Rock Pigeon has spread throughout most of the continent, its current status in Canada remains unclear. BBS data show a North American decline of ~1% per annum since 1966 (Sauer et al. 2017). There is no real conservation concern for this introduced species, which is widely considered a pest, though its ecological significance may be underappreciated. For example, in many urban centres, the Rock Pigeon is an important prey species for the Peregrine Falcon (White et al. 2002) and some wintering raptors such as Gyrfalcon (Booms et al. 2008).