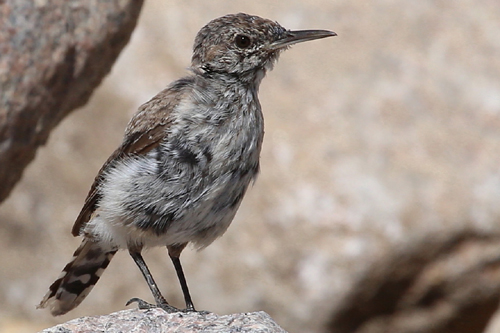 Characteristics and Range This large, speckled wren occurs primarily in arid and semi-arid regions from southwestern Canada through the western U.S.A. and Mexico to Honduras. It is migratory in the northern part of this range. The closest parts of the normal breeding range to Manitoba are in southeastern Saskatchewan and western North Dakota, including some rocky, human-altered sites such as rock piles in non-arid regions (Renaud 1979).

Distribution, Abundance, and Habitat The sole atlas record involved a singing male Rock Wren that occupied a territory at a small quarry in a forest clearing 15 km south of Pinawa. Discovered on 5 July, 2013, it remained until at least 4 August; there was no sign of a mate. While Rock Wrens have been found in southern Manitoba ~20 times, mostly in May and June, this is the first record of prolonged territorial behaviour. Remarkably, however, pairs nested at Churchill in 1956 (apparently returning in 1957) and 1988 (The Birds of Manitoba). The first confirmed breeding record for Minnesota was in 2004 (Chu 2005).

Trends, Conservation, and Recommendations Analysis of long-term BBS trends indicates mostly increasing populations within the U.S. portion of the breeding range, but there is little likelihood of future range extension into Manitoba. Potential breeding habitat exists sparingly at quarries, dams, and erosion features in southern Manitoba and at rocky tundra sites in the north, but climatic and distance factors probably hinder regular occupation of such sites.