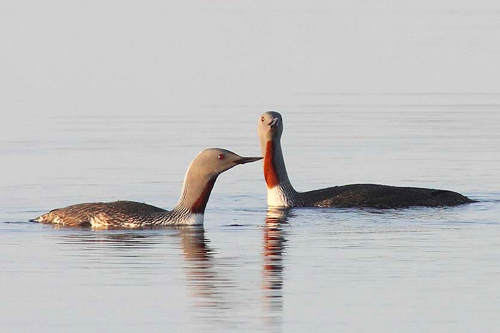 Characteristics and Range By far the smallest and most slender of its family, the Red-throated Loon is fairly easy to identify during the breeding season. Besides its relatively small size, it has dark brownish-grey upperparts (rather than the black of other loons) and a slender upturned bill. The dark red throat patch of adults is often difficult to discern. In winter, birds are greyish. In all seasons, swimming Red-throated Loons hold their bills turned slightly upwards, an obvious feature even at great distances. The species has a circumpolar breeding range, primarily in the High Arctic, but farther south along the North American coasts, including Hudson Bay, and in parts of Eurasia. North American breeders winter primarily along the Pacific coast from the Aleutians to Baja California and on the Atlantic coast from the Maritimes south to Georgia. (Barr et al. 2000). Migrants can occur by the hundreds at the mouth of the Churchill River in spring (Jehl 2004), but are generally rare in southern Manitoba, except occasionally on the Winnipeg River and Lake Winnipeg, usually well offshore, and especially during years with a late spring thaw (P. Taylor, B. Shettler, pers. obs.).

Distribution, Abundance, and Habitat Red-throated Loons are most commonly found north and west of Churchill, where fully 80% of squares in the Arctic Plains & Mountains were occupied and breeding was confirmed in four squares. Elsewhere there were a few records in the Wapusk National Park area and some farther inland in the Nejalinini Lake, Nueltin Lake, and Baralzon Lake vicinities. Relative abundance and probability of observation were highest in the Arctic Plains & Mountains. Atlas fieldwork has greatly extended the known breeding range in Manitoba, as compared with The Birds of Manitoba, which shows breeding only at Churchill, where there has been no recent local nesting (Jehl 2004, pers. obs.). Preferred habitat during the breeding season is described as ponds in coastal tundra, where nests are located on small hummocks or vegetated spits of land. These ponds can be quite small (0.1 - 1.5 ha but much larger in the high Arctic, Barr et al. 2000) as Red-throated Loons can get airborne much more easily than other loons. Adults fly to larger lakes or to the sea to feed or to find food for the chicks.

Trends, Conservation, and Recommendations There are no data on population trends in Manitoba. Elsewhere in North America, population declines have been noted in Alaska. Possible causes for the declines are numerous; they include nest predation, changes in fish populations in the wintering areas, disturbance and habitat loss from gas and oil development, and entanglement in gill nets (Walton et al. 2013). This species is highly sensitive to the slightest human disturbance, which may explain the lack of recent nesting at Churchill.