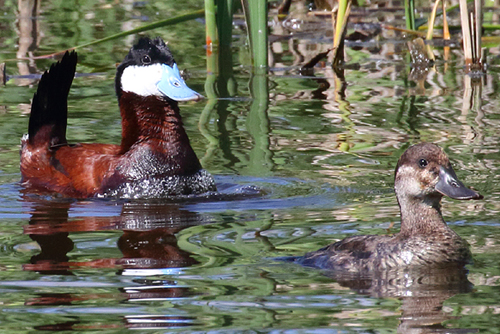 Characteristics and Range Named for the male's colourful plumage, the species is as famous for its distinctive appearance as for its elaborate courtship displays. The latter involve males holding their head feathers erect as "horns", head-bobbing, bill-pounding that produces a stream of bubbles, and low belching noises. The Ruddy Duck breeds primarily in the Prairie Potholes extending north to Great Slave Lake and in some valleys west of the Rocky Mountains, as well as in disjunct locations around the Great Lakes. Southern Manitoba represents the eastern limit of the main breeding range. Its winter range extends throughout the southern two-thirds of the conterminous U.S.A. to southwestern Mexico. Resident populations occur in the Caribbean and South America, the latter sometimes considered a separate species (Carboneras and Kirwan 2016).

Distribution, Abundance, and Habitat Although atlas data showed a general distribution similar to that described in The Birds of Manitoba (south of The Pas and west of Lake Winnipeg), the atlas also revealed that the Manitoba breeding range is heavily centred in the Prairie Potholes south of Riding Mountain National Park and west of the Pembina River valley. Breeding evidence north of Riding Mountain National Park, in the Interlake, and in south central and southeastern Manitoba was notably sparse, with the exception of the Shoal Lakes, Oak Hammock Marsh and the Winnipeg area. Analyses of relative abundance and probability of observation both support the conclusion that the bulk of the Manitoba population is found in the province's southwest corner, decreasing northward and eastward, with outlying occurrences often occurring at sewage lagoons.

The Ruddy Duck breeds in freshwater marshes with open water and potholes deep enough for its habit of diving for aquatic invertebrates and submerged plant material. Breeding sites typically have substantial emergent vegetation, which is important for nesting (Brua 2002).

Trends, Conservation, and Recommendations Generally considered stable, BBS data show no significant trend for this species either nationally or in any of the western provinces. Aerial surveys show a 1.6% per year increase (1970–2006) in the Prairie Potholes (Fast et al. 2011). Draining of sloughs and marshes in Manitoba is an ongoing problem for this species and other waterfowl, but the Ruddy Duck has doubtless benefited from wetland conservation measures made through the North American Waterfowl Management Plan.