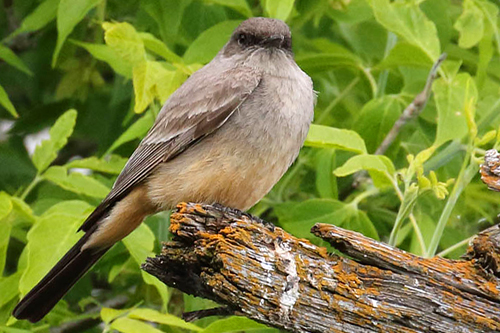 Characteristics and Range Say's Phœbe is marginally larger than the more familiar Eastern Phœbe, but differs considerably in plumage. Adults are medium greyish on the upperparts, slightly paler grey on the breast, with a warm cinnamon abdomen and underwing coverts. The wings show two indistinct bars, while the tail is black. This is a fairly hardy species that can survive by feeding on terrestrial invertebrates during cold spells; Manitoba breeders may arrive as early as March and depart as late as October (Carey et al. 2006). There are two seemingly disjunct breeding ranges. The northern one occupies much of Alaska, Yukon, and the Northwest Territories, with a small extension into northern British Columbia. The other, more extensive area, stretches from southern British Columbia and the southern Prairie Provinces through much of the western U.S.A. to Mexico. Wintering takes place in the southwestern states and Mexico (Schukman and Wolf 1998).

Distribution, Abundance, and Habitat Atlas results show Say's Phœbe to be entirely restricted to the Prairie Potholes, where 8% of squares were occupied, mostly from the Pembina River valley west and concentrated in the extreme southwest. There were too few records to analyse relative abundance and probability of observation. In Manitoba, Say's Phœbes are found in open country, typically grassland or farmland and occasionally small town sites. The proportion of confirmed records was high, attesting to the relative ease of finding nests. These are placed almost exclusively on ledges or in old Barn Swallow nests in abandoned homes, barns and other man-made structures.

Trends, Conservation, and Recommendations Considered to have first reached Manitoba in the early 20th century (~1910), and having further extended its range since the mid 1980s (The Birds of Manitoba), Say's Phœbe is now well established in Manitoba. BBS data indicate a large population increase in Canada since about 1970, although this has slowed in the past decade. This species' future in the province is precarious because of its need of abandoned buildings, few of which merit preservation on other grounds.