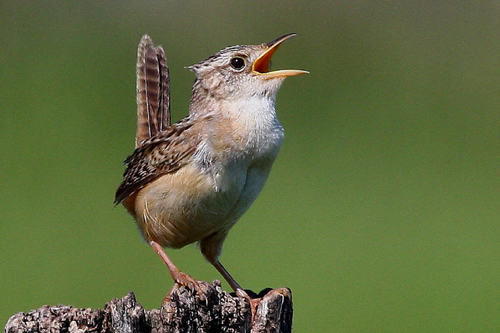 Characteristics and Range The male's staccato song, combined with sharp call-notes, makes this small and otherwise inconspicuous wren quite easy to detect. The breeding range of the migratory North American subspecies is a roughly triangular region between central-eastern Alberta, across Canada to southern Quťbec, and southward to northern Missouri. BBS analysis reveals a core region of highest abundance in a smaller triangle from southern Manitoba to the eastern Dakotas and east to Wisconsin. Range definition is complicated by the species' nomadic movements, driven by the sporadic availability of suitably moist habitat. The winter range extends through the southern coastal plain from the Carolinas through the Gulf States to northeastern Mexico. Numerous other subspecies occur in various regions from central Mexico to Patagonia, with potential for future splitting of sibling species.

Distribution, Abundance, and Habitat Atlas records show a core Manitoba range much as outlined in The Birds of Manitoba, but with a few scattered occurrences many hundreds of kilometres farther north. The Sedge Wren was found throughout the southern half of Manitoba, including much of the Prairie Potholes, Boreal Taiga Plains, and Boreal Hardwood Transition regions. Peak abundance was localized in three relatively small regions: the southern half of the Interlake; the flatlands between the Manitoba Escarpment and Lakes Manitoba and Winnipegosis; and the strip of lowlands between the Red River valley and the edge of the Canadian Shield. In the southwestern corner of the province, probability of observation was high, but abundance was below these peak levels. Preferred habitats are grass and sedge marshes with scattered shrubbery, often at the fringes of deep-water marsh complexes. Sedge Wrens also inhabit wet hayfields, ungrazed pastures and, to a lesser degree, boreal marshes or even wet spots in grain fields.

Trends, Conservation, and Recommendations Analysis of BBS data shows pronounced increases in the west, primarily in Saskatchewan and the Dakotas but including parts of southern Manitoba, and decreases in the north and especially the east. These changes are probably linked, at least in part, to abundant moisture in parts of the northern Great Plains since about 1990, which may have limited the need for nomadic movement away from the core range. While there is no immediate conservation concern for this species in Manitoba, measures to conserve wetland margins in drier times would be beneficial.