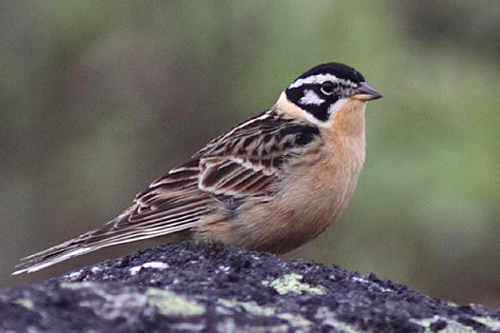 Characteristics and Range Longspurs are small sparrow-like songbirds, of which three are strictly North American in distribution. Male Smith's Longspurs have a colourful breeding plumage, with a boldly patterned black-and-white head and orange underparts. Females are more cryptically coloured. The breeding range is a narrow sliver, associated with the treeline-tundra transition, stretching from Cape Henrietta Maria on the Hudson Bay coast of Ontario in the east to northern Alaska in the west. The winter range is restricted to south-central U.S.A. (Briskie 2009).

Distribution, Abundance, and Habitat  In Manitoba, breeding Smith's Longspurs are confined to a relatively narrow band across the north, from the mouth of the Nelson River to Nueltin Lake, with greatest densities found in the Wapusk National Park area, the vicinity of Hudson Bay just south of the Nunavut land border, and the Baralzon Lake to Nejanilini Lake region. Smith's Longspur was found to have a patchy distribution with some clusters of abundance. There were detections in only 23% of squares with ≥3 hours of effort in the Taiga Shield & Hudson Plains and only 11% in the Arctic Plains & Mountains. Nonetheless, it was found on 21 of 30 point counts in two squares in Wapusk National Park and on 10 of 15 point counts in one square near Nejanilini Lake. Although found in three of the 10 squares in the immediate vicinity of Churchill, detections were sparse here (1 of 123 point counts), as reflected in the relative abundance map. The high probability of observation east of the Nelson River is based on one record only and is probably exaggerated; indeed, habitat is limited there and the distribution in nearby Ontario is very patchy (Hussell 2007). Smith's Longspur habitat in the Manitoba breeding range is described as large, wet sedge meadows with low hummocks and isolated clumps of spruce, tamarack and heaths along the treeline-tundra transition (Jehl 1968).

Trends, Conservation, and Recommendations Formerly a common breeder in the Churchill area, Smith's Longspur has dramatically declined since the 1960s. In recent years, it has been increasingly difficult to find in traditional breeding areas (pers. obs.). The reasons for the decline are obscure, but may be due to general drying-out of fens caused by isostatic rebound and/or climate change, an encroaching treeline, human disturbance, or a combination of these factors. The steep declines at Churchill contrast with the high-density pockets recorded both southeast and northwest of Churchill, as also noted for Lapland Longspur, Harris's Sparrow, Red-necked Phalarope and other species. Although most of the breeding range is sparsely inhabited, increasing resource extraction may pose a threat, as may climate change. Smith's Longspur may also be vulnerable to land-use changes and contaminants on migration and wintering grounds (Briskie 2009). As most knowledge of this species' unusual breeding biology comes from studies at a single location (Churchill), additional studies at other sites are needed (Briskie 2009).