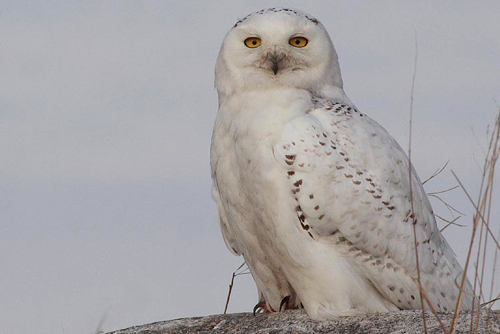 Characteristics and Range Large, unmistakable, and enigmatic, the Snowy Owl is a symbol of the Arctic and of winter to many. Its circumpolar breeding range lies predominantly above 60°N with northernmost Manitoba representing the extreme southern limit of the breeding distribution, though breeding may be irregular here. North American populations winter across Canada and the northernmost conterminous U.S.A., especially in non-forested habitats, but with periodic irruptive movements much farther south.

Distribution, Abundance, and Habitat Breeding evidence for the Snowy Owl was found in only three squares with rocky coastal tundra habitat near Cape Churchill, Churchill, and north of the Caribou River. Despite excellent coverage in coastal areas, there was no confirmed breeding. Former documented breeding in the Cape Churchill area has coincided with high lemming numbers (The Birds of Manitoba) and the relatively low numbers of lemming-dependent species such as Rough-legged Hawk may suggest that the atlassing period did not coincide with particularly high lemming years in Manitoba.  The Snowy Owl prefers elevated promontories such as beach ridges that serve both as a suitable nesting substrate and as elevated perches for hunting (Holt et al. 2015). Breeding in Manitoba, south of the core range, is probably tied to such relatively uncommon habitat and to lemming abundance.

Trends, Conservation, and Recommendations The Snowy Owl is now considered globally Vulnerable. Some recent publications based largely on CBC data have suggested significant declines in North America, including an estimate of 2.1% annual declines from 1966 to 2006 (Downes et al. 2011) and an estimate of 64% population loss from 1966 to date (Rosenburg et al. 2016). Although some degree of decline has probably occurred, these results must be treated with caution since discerning trends for this irruptive species is exceptionally difficult and CBC methods are poorly suited to surveying it. Especially given the potential impacts of climate change, and the myriad of threats faced by this species (e.g., human disturbance, rodenticides, incidental trapping, shooting, and vehicle collisions), the Snowy Owl warrants better monitoring and population assessment than is currently available.