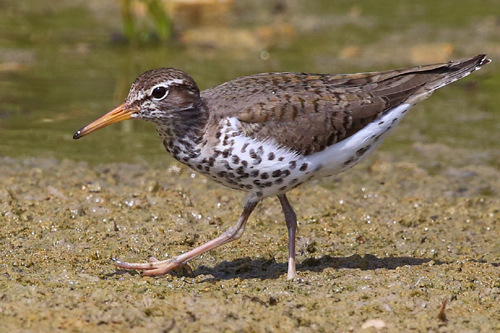 Characteristics and Range Many sandpipers have barred, streaked, or finely marked underparts, but only the Spotted Sandpiper has bold, thrush-like speckles in breeding plumage (juvenile and non-breeding plumages are unspotted). Other characteristics of this fairly small, brown-and-white sandpiper include its famous teetering walk, shallow quivering wingbeats, and long series of loud weet-weet-weet calls. The species is noted for its sexual role reversal: females are larger than males, arrive earlier in spring, take the courtship lead, and are frequently polyandrous, while males assume a large portion of parental duties (Reed et al. 2013). The breeding range includes all of Canada except the High Arctic, most of Alaska, and about two-thirds of the conterminous U.S.A. The southern boundary runs from northern California to North Carolina, dipping southward in Arizona and New Mexico. The winter range extends across the southern U.S.A., northward on the Pacific coast to southern British Columbia, and southward through the Caribbean, Mexico, and Central America to include much of South America (Reed et al. 2013). A closely related species, the Common Sandpiper (A. hypoleucos), has a comparably extensive range in the Old World.

Distribution, Abundance, and Habitat As expected, atlassers found the Spotted Sandpiper province-wide, with numerous confirmed breeding records in most regions. Detection rates were uniformly high at 40-46% of surveyed squares in the Prairie Potholes and most of the boreal forest, falling to 31% in the Boreal Taiga Plains and 21% in the Arctic Plains & Mountains. Mean abundance was markedly higher in the Taiga Shield & Hudson Plains than elsewhere, and point-count detection was infrequent (just 11 squares) in the Boreal Hardwood Transition region. Spotted Sandpipers breed on boreal lakes and rivers, prairie streams, and a variety of constructed wet areas such as marsh impoundments, flooded gravel pits, farm dugouts, and sewage lagoons. Breeding habitat includes shoreline for foraging, semi-open habitat for nesting, patches of dense vegetation for brood cover, and limited access for terrestrial predators; small islands in lakes and rivers are often ideal (Reed et al. 2013), notably at Little George Island and other islands in Lake Winnipeg (R. D. Mooi, pers. obs.).

Trends, Conservation, and Recommendations Analysis of BBS data yields a patchwork of increasing and decreasing trends (generally small and often not statistically significant) across the southern half of the Spotted Sandpiper's breeding range. The reliability of these trends is limited by low detection rates due to insufficient water access for most roadside BBS routes. Slow but significant, long-term declines are apparent in Canada (1.5% per year) and the U.S.A. (1.1% per year), while the Prairie Potholes is one of a few regions showing significant increases (1.8% per year). There is some concern that levels of pesticides and other contaminants in Spotted Sandpipers and their eggs may be high enough to impair breeding success (Reed et al. 2013). Nevertheless, conservation concern for this species is low because of continuing large numbers and its vast breeding range. Improved monitoring is desirable but probably difficult to achieve, because of the need to survey a multitude of small and/or remote water bodies and islands.