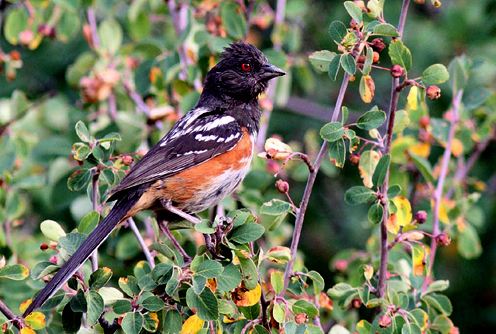 Characteristics and Range The Spotted Towhee is the western counterpart of the Eastern Towhee (formerly considered conspecific) and extremely rare in Manitoba, though it may breed in the extreme west. Despite the white spots on its back and wings, the Spotted Towhee lacks the white mark at the base of the primaries (the so-called "pocket handkerchief") of the Eastern Towhee; hybrids usually show both features. In addition, female Spotted Towhees have a greyer colouration than the brown female Eastern Towhees. The Spotted Towhee nests from Vancouver Island east across southernmost western Canada to the Saskatchewan-Manitoba border, with resident populations along the Western Cordillera south to northern Mexico, and disjunct resident populations as far south as Guatemala. Northern interior nesting birds migrate south in winter to the Great Plains from North Dakota to northeastern Mexico (Bartos Smith and Greenlaw 2015).

Distribution, Abundance, and Habitat The Spotted Towhee was recorded in only four atlas squares in southwest Manitoba and no confirmed breeding records were obtained. A pair observed in sandhills west of Oak Lake constituted the highest breeding evidence. Multiple detections in June, 2015, 2016, and 2017 of adult Spotted Towhees and hybrids in the Spy Hill-Ellice Community Pasture in the Qu'appelle River valley west of St-Lazare (Callin 1980, C. Artuso, R. Berger, pers. obs.), immediately adjacent to an area in Saskatchewan where both species occur (see The Birds of Manitoba), suggest that nesting may occur regularly here. Atlas and post-atlas sightings, other than records thought to pertain to migrants or over-shooting migrants, have been in dense shrubby habitats, such as in sandhills, near the tops of steep-sided river valleys above the tall riparian forests, and in dense young aspen clones.

Trends, Conservation, and Recommendations The Spotted Towhee is not generally a species of conservation concern and its occurrence in Manitoba is too limited to warrant specific management. Elsewhere in the range, predation by domestic cats has created population sinks; over-grazing and browsing by cattle and goats have caused problems, including the extinction of insular populations such as the endemic subspecies consobrinus of Isla Guadelope, Mexico; and habitat alteration has resulted in hybridization of towhee species that were formerly segregated by habitat type (Shipley et al. 2013, Bartos Smith and Greenlaw 2015).