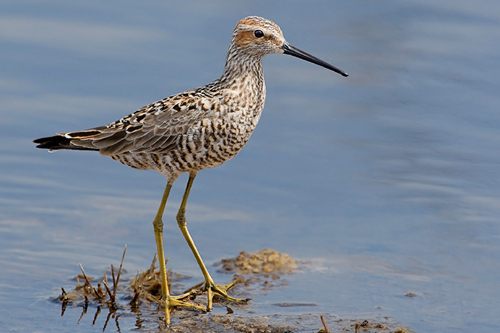 Characteristics and Range In addition to the proportionately long legs that earn this species its name, the Stilt Sandpiper is unmistakable in breeding plumage, with its barred underparts offset by rusty ear coverts and crown. It breeds in a narrow band, albeit not completely contiguous, from northwestern James Bay to northeastern Alaska, mostly following the treeline-tundra transition. It is strongly associated with sedge-tundra, typically where meadows are interspersed with small stands of trees or treed edge. It winters from the Gulf of Mexico to southern South America, although mostly in interior freshwater wetlands of South America (Klima and Jehl 2012).

Distribution, Abundance, and Habitat The Stilt Sandpiper was found breeding just north of the Nelson River mouth and up to 80 km inland in the Wapusk National Park area, as well as across the extreme north as far west as Courage Lake (200 km inland). This is farther north in Manitoba than depicted in Klima and Jehl (2012) and slightly farther west than indicated in The Birds of Manitoba. All records of the Stilt Sandpiper east of the Nelson River consisted of small flocks feeding in ponds near the coast in late July, and it remains unclear if it breeds around Cape Tatnum despite confirmed breeding just east of the Ontario border (Burke et al. 2007). Relative abundance and probability of observation were generally higher where the treeline meets the coastal plain, but the strong inland cluster around Courage Lake, Schmok Lake, and Nejanilini Lake, where it was found in 13 of 23 squares surveyed (57%), is noteworthy. Although this species is poorly surveyed by the point count method, atlas data suggest it occurs in low densities with peak abundances generally <5% of many other shorebirds such as Red-necked Phalarope and Whimbrel.

Nesting commonly on peat hummocks in sedge meadows, this species shares breeding sites in Manitoba with Whimbrel, Hudsonian Godwit, Dunlin, Least Sandpiper and, to a lesser extent, American Golden-Plover (Klima and Jehl 2012) and Red-necked Phalarope. Unlike these species, it is rarely encountered foraging in the intertidal zone (pers. obs.).

Trends, Conservation, and Recommendations This species has experienced a seemingly steady decline since the 1930s in the immediate vicinity of Churchill (The Birds of Manitoba); for example, falling from 12–16 pairs/km2 in the 1960s to 2–4 pairs/km2 in the 1990s (Bart et al. 2007); as well as declining in La Pérouse Bay through the 1980s and 1990s, though possibly increasing in the 2000s there (Rockwell et al. 2007). At least for other shorebirds, excessive grazing of vegetation by geese has been suggested as a possible explanation for the declines (Klima and Jehl 2012), as has the drying of fens and encroachment by shrubs and trees due to isostatic rebound and/or climate change (Ballantyne and Nol 2015). However, it remains unclear if this decline is widespread.