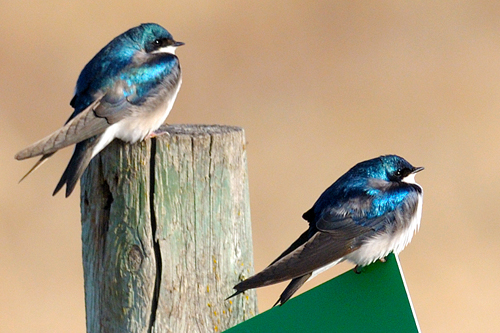 Characteristics and Range Due to its ability to switch to feeding on seeds and berries in adverse weather conditions, the Tree Swallow is often the first aerial insectivore to return to Manitoba in spring. Identified by its iridescent blue-green back, white underparts and slightly forked tail, this species nests in cavities, most often in old woodpecker holes and artificial nest boxes (Robertson and Rendel 1989, Winkler et al. 2011). The Tree Swallow is a widespread species of relatively open habitat types, nesting across North America from the treeline (and even farther north where artificial nest structures are available) south across the northern two-thirds of the conterminous U.S.A., although the placement of nest boxes has also permitted southward expansion. This species winters in the southern U.S.A., northern Mexico, Cuba, and along the Gulf of Mexico and the Caribbean coastline of Central America (Winkler et al. 2011).

Distribution, Abundance, and Habitat As noted in The Birds of Manitoba, the Tree Swallow nests in all regions of Manitoba; it is present in all BCRs, most abundant in the Prairie Potholes and least abundant in the Arctic Plains & Mountains. Tree Swallows were most frequently encountered in areas where open wooded habitats occur and were found in >75% of surveyed squares in the Prairie Potholes and Boreal Hardwood Transition. Peak probability of observation and relative abundance occurred in a band from the southwestern corner of the province, around Lake Manitoba and through the southern Interlake, into the Red River valley. Occupied squares in northern Manitoba coincided with forest edge, beaver meadows, rights-of-way (e.g., the Wabowden to Churchill railway line), open areas created by the Seal, Owl, and Hayes Rivers, and northern communities such as Tadoule Lake. Probability of observation was notably lower north of the treeline along the Hudson Bay coast from Wapusk National Park to the Nunavut land border, which are areas lacking nesting cavities unless provided artificially as now occurs in Churchill. Relative abundance notably drops in the eastern Canadian Shield around Island Lake and Little Grand Rapids and in areas of intensive crop production in southern Manitoba east of the Pembina River valley.

Trends, Conservation, and Recommendations As with other aerial insectivores, BBS data indicate that the Tree Swallow is undergoing long-term population decline, although less so in Manitoba than in some other areas, notably northeastern Canada (Shutler et al. 2012). Possible reasons for decline include competition with the introduced European Starling, loss of nesting habitat due to logging, and reduced food availability due to climate change and use of pesticides (Winkler et al. 2011). Warmer springs from 1959 to 1991 have advanced egg-laying by 3-9 days across its range (e.g. Dunn and Winkler 1999, Hussell and Brittingham 2002). Bioaccumulation of toxins such as mercury may cause multiple negative impacts including reductions in egg size, the number of fledglings and immunity (e.g., Brasso and Cristol 2007, Hawley et al. 2009). Conservation of forests with large amounts of deadwood (dead limbs and standing snags) alongside open habitats, such as wetlands and grasslands is likely to benefit this species.