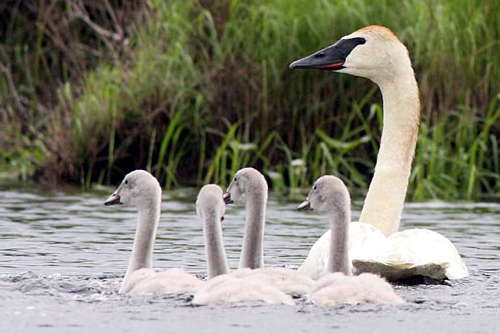 Characteristics and Range The Trumpeter Swan is the largest North American waterfowl species. Though larger and longer-necked than the Tundra Swan, this size difference is often difficult to discern in the field; the longer, straighter bill and other facial details, as well as the distinct call, help in identification. Disjunct breeding populations occur from Alaska and western Canada east to the Great Lakes region and south to Wyoming and Nevada. The northern limit of the historic breeding range in Manitoba was about 300 km south of Churchill, as the species needs 140-154 ice-free days for successful breeding (Lumsden 1984). Most birds winter along the northwest coast of North America; however, the growing interior population (including Manitoba breeders) winters in and near southern parts of the breeding range (Mitchell and Eichholz 2010).

Distribution, Abundance, and Habitat Most confirmed and probable breeding records were in the southern half of the province, with notable concentrations in Riding Mountain National Park and regions bordering Ontario, east of the Red River and Lake Winnipeg. There were three possible breeding records in the Wapusk National Park area, where the Tundra Swan is the more expected breeder. A few other observations in the north involved swans that could not be identified to species. The number of detections was highest in the Boreal Hardwood Transition (12% of surveyed squares), followed by the Boreal Taiga Plains (4%) and the Boreal Softwood Shield (3%), and negligible in the Taiga Shield & Hudson Plains and Prairie Potholes at <1% each. The percentage in the Boreal Taiga Plains is skewed due to extensive aerial surveys conducted over Riding Mountain National Park in 2010. The number of swans detected in these surveys in the national park more than doubled just after the atlas period, from 34 swans in 2010 to 97 in 2015 (Groves 2017). Breeding habitat in the province consists mainly of isolated ponds and cattail marshes in boreal forest areas. Nests are often placed on muskrat mounds, old beaver lodges, or tussocks of vegetation, well away from solid ground.

Trends, Conservation, and Recommendations During the fur trade era, the Trumpeter Swan was extirpated from most of its breeding range, including Manitoba, by over-hunting for skins, quills and meat (Houston et al. 1997). By the late 19th century only a few dozen birds survived in the western U.S.A., in and near Yellowstone National Park. Prior to the discovery of substantial breeding populations in Alaska and northwestern Canada in the 1950s, it was generally believed that extinction was only a matter of time (Bent 1925). Protection measures, combined with captive breeding and release programs, have allowed this species to make a remarkable recovery. It is likely that expansion of breeding populations in Saskatchewan, northwestern Ontario, and Minnesota are responsible for the species' reoccupation of much of its former range in Manitoba, which has taken place primarily during the past two decades (the early stages are described in The Birds of Manitoba). Current threats include poor-quality breeding habitat, loss of wintering habitat, the concentration of wintering flocks at relatively few sites, human disturbance, and lead poisoning (Mitchell and Eichholz 2010).