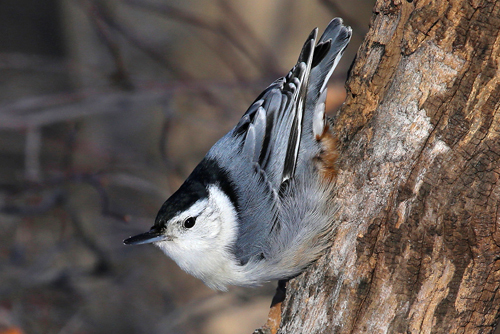 Characteristics and Range A slender pointed bill, short tail, blue-grey upper-parts, and frequent upside-down perching on tree trunks define a nuthatch. In addition to its unmarked white breast, this species is distinguished by a plain white face with "beady" eyes, dark cap and nape, and a small patch of rust colour under its tail. Its nasal songs and calls are lower-pitched than those of the Red-breasted Nuthatch. The White-breasted Nuthatch is a permanent resident from the southern fringe of the boreal forest in Canada through most of the conterminous U.S.A. to central Mexico, excluding the Great Basin and parts of the upper Pacific Northwest, the arid southwest, Great Plains, Gulf coast, and peninsular Florida (Grubb and Pravosudov 2008). Though this is a largely sedentary species, with pairs occupying permanent territories, there is evidence of occasional irruptive movements away from winter extremes (Grubb and Pravosudov 2008).

Distribution, Abundance, and Habitat Atlas records were concentrated mainly in the Prairie Potholes, the Boreal Hardwood Transition, and the southern Boreal Taiga Plains. Scattered records in the northern Boreal Taiga Plains and the southeastern Boreal Softwood Shield extend the range by about 100 km beyond the previous estimate of the range limit depicted in The Birds of Manitoba, up to a line from The Pas (where breeding was confirmed) to about Berens River. The highest abundance was found in a broad region from the Manitoba Escarpment and western Interlake through the Red River valley to the western Boreal Hardwood Transition, contrasting with relative scarcity in the extreme southwest. Peaks in probability of observation are concentrated around the Manitoba Escarpment and the Winnipeg area. Point-count data likely underestimate abundance, because this species nests early (typically starting in April) and is rather quiet in the latter part of the breeding season.

Trends, Conservation, and Recommendations BBS analysis indicates increasing numbers in most of the White-breasted Nuthatch's range, including significant long-term upward trends for both Manitoba and Canada. Manitoba CBC data also indicate increasing populations. Given these trends and the species' affinity for wooded areas near human habitation, its future seems assured. Because it relies largely on existing cavities for nesting, retention of mature deciduous trees, standing snags, and dead limbs are helpful.