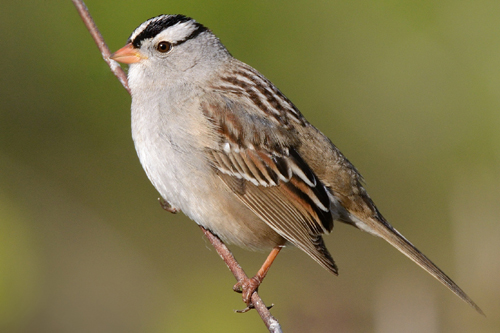 Characteristics and Range This familiar northern breeder is readily identified by its boldly striped crown pattern and distinctive, slightly buzzy song. It breeds from northern Newfoundland, through the Taiga Shield & Hudson Plains to Alaska, and south along the Rocky Mountains to New Mexico, as well as in a narrow band along the Pacific coast to southern California. This species is behaviourally diverse, with resident, short-distance, and long-distance migratory populations, wintering on the Pacific coast and across most of the conterminous U.S.A.. and northern Mexico (Chilton et al. 1995). As a migrant in southern Manitoba, it often associates with Harris's Sparrow, and both species sing during the spring migration.

Distribution, Abundance, and Habitat The White-crowned Sparrow is ubiquitous in the province's far north, found in 90% of all squares with ≥3 hours of effort in the Hudson Bay Lowlands. Atlas detections suggest its southern range limit reaches 56.4°N in the west near Leaf Rapids and 55.8°N in the east near Shamattawa.  Southern outliers in four squares east of Pukatawagan, near Ponton, and on the Gods River at 55.2°N push the limit south by approximately 200 km from that estimated in The Birds of Manitoba, but occurrences this far south may be sporadic. Relative-abundance analysis showed a clear peak in the Taiga Shield & Hudson Plains, especially in the central portion. Presumably due to its ease of detection, being vocal and conspicuous, the probability of observation is evenly high across the Taiga Shield & Hudson Plains, decreasing near its border with the Boreal Softwood Shield.

In Manitoba, the White-crowned Sparrow is a bird of the northern boreal forest, treeline-tundra transition, and tundra (Chilton et al. 1995). It seems to prefer a patchy mix of a few trees, shrubs, grasses or forbs, and bare ground, and is most often found in proximity to water (Chilton et al. 1995, pers. obs.).  It is a common breeder in northern towns such as Gillam and Churchill, and it will readily use roadside ditches and areas regenerating after clearing.

Trends, Conservation, and Recommendations BBS data show no significant long-term trend in Canada; however, eastern populations are poorly surveyed by the BBS. Combined analyses of BBS and CBC data suggest a possible decrease of 18% since 1970 (Rosenburg et al. 2016) but the species' status in Manitoba has been judged as Secure.