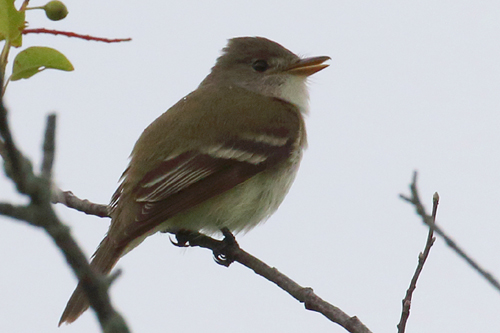 Characteristics and Range The Willow Flycatcher belongs to the genus Empidonax, probably the most difficult group of landbirds in North America to identify visually. All members are small flycatchers with olive to greyish upperparts and paler underparts, pale wingbars and pale eye-rings. Fortunately, the Willow Flycatcher has a fairly distinct song (commonly rendered as fitz-bew) and habitat preferences that differ from other species in the genus. As a breeder it occurs in two main, largely disjunct regions: in the west from southern British Columbia south through the Rocky Mountains and Great Basin to Arizona and New Mexico (with a small population in California), and farther east from southern Saskatchewan and Manitoba to New Brunswick and Maine and south through the Midwest and the Appalachians. Wintering takes place from Mexico south to northern South America (Sedgwick 2000).

Distribution, Abundance, and Habitat In Manitoba, the Willow Flycatcher is restricted to the extreme south of the province, with the majority of records obtained within 60 km of the U.S. border and west of the Pembina River valley. All records came from the Prairie Potholes, except for one from the Boreal Taiga Plains (Red River valley south of Winnipeg). There were three outliers to the east and a small cluster of records within the same atlas square well to the north around Big Grass Marsh (in willow-lined ditches and a willow swale). No confirmed breeding was reported. Indeed, there have been very few documented nests in the province; the first was found near Melita in 1987 (De Smet and Conrad 1988). Too few birds were recorded to produce relative abundance or probability-of-observation maps, but the area south of Melita (Souris River and Blind Souris valleys) has traditionally been the most reliable region to find this species.

The Willow Flycatcher generally prefers drier habitat than the similar Alder Flycatcher. In Manitoba, it frequents shrubby areas or isolated copses in grassland ravines (coulees), shrubs along creek beds and occasionally other habitats with low deciduous vegetation. Areas with hawthorns and saskatoon serviceberry are particularly attractive to this flycatcher.

Trends, Conservation, and Recommendations Willow Flycatcher populations have been declining in Canada since the 1970s (BBS data), although their occurrence in Manitoba is too limited to detect a significant trend here. Threats listed by Sedgwick (2000) include river de-watering, channelization, overgrazing and dam construction, but these apply mainly to U.S. populations, particularly the Endangered subspecies extimus of the southwest. Declines mirror those of other insectivores for reasons that remain unclear; however, there is some evidence of habitat loss on the wintering grounds for this species (Sedgwick 2000). The nesting habitat in southwestern Manitoba dœs not seems to be under immediate threat, but preservation of habitat and continued monitoring of the species are recommended. There is also potential for climate-driven extension in the province.