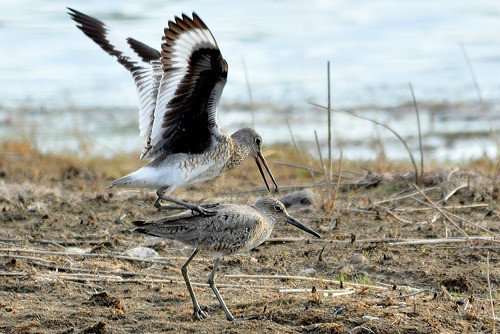 Characteristics and Range The Willet is a large, stocky shorebird with a straight grey bill, grey legs, and grey plumage with few contrasting markings (subtly barred below in breeding). When it takes flight, however, gracing the prairie skies with aerial displays, dogfights, chases, and swoops, its nondescript pattern is transformed by the exquisite black-and-white striped wings. Its distinctive pill-will-willet call is also useful in locating and identifying this shorebird. There are two subspecies that may warrant full species status (Oswald et al. 2016). The "western Willet" (inornata) nests in grasslands across west-central North America from the Prairie Potholes west to the Rocky Mountains and southwest to the Great Basin in California. The "eastern Willet" (semipalmata) nests in salt and brackish marshes along the Atlantic coast from the Maritime Provinces to the Gulf of Mexico and the Greater Antilles. The wintering grounds are coastal, in the west from northern California to central Chile (western Willet only), and in the east from Delaware to Uruguay (both subspecies) and overlap with the breeding grounds of some eastern Willets (Lowther et al. 2001, Oswald et al. 2016).

Distribution, Abundance, and Habitat Much as estimated in The Birds of Manitoba, the Willet is predominantly a bird of the Prairie Potholes, extending into the southern portions of the Boreal Taiga Plains as far north as Lake St. Martin and Winnipegosis areas. Its peak abundance is loosely centred on the Souris River valley, east to Cartwright, and north to Virden. Abundance begins to lessen from Virden eastward to the Arden Ridge, and north to Russell. There was also an area of medium abundance around Lake Manitoba. The probability of observation was highest in southwest Manitoba, especially from Whitewater Lake to Oak Lake, decreasing northward and eastward. The Willet is largely associated with prairie as it prefers to nest in short grasses with sparse cover close to shallow wetlands (Lowther et al. 2001). Although known to nest in some types of cropland, the Willet tends to avoid tilled land (The Birds of Manitoba, Lowther et al. 2001), which may explain the near-absence of records from the agriculture-dominated Red River valley (contrasting with the Marbled Godwit which was much more numerous in the southernmost portion of the Boreal Taiga Plains).

Trends, Conservation, and Recommendations Market hunting and egg harvesting greatly impacted the eastern Willet (Lowther et al. 2001) and hunting still occurs on the migratory pathway and wintering grounds; for example, 5,300 Willets are shot annually in Grenada (Morrison et al. 2012, Watts and Turin 2016). BBS trends suggest the Willet population in Manitoba is relatively stable despite long-term declines in Canada overall. As with so many grassland birds, massive and widespread loss of grassland habitat is the principle conservation concern (Lowther et al. 2001). In Manitoba, conservation grazing regimes and the retention of ephemeral wetlands are two strategies to ensure the persistence of the Willet and other prairie shorebirds as nesting species.