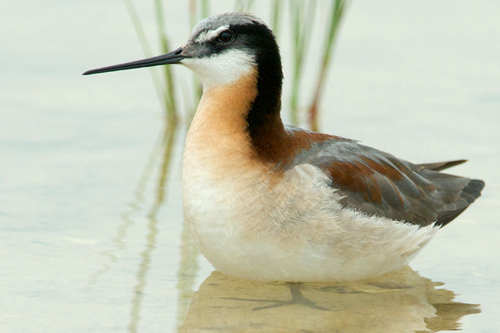 Characteristics and Range The female Wilson's Phalarope in her nuptial garb of deep chestnut wing stripes and shoulder stripes blending into a thick black neck stripe and eye-line, all contrasting with soft grey upperparts and crisp white underparts, richly infused with peach in the foreneck, can only be described as exquisite. What her grey-brown mate (or mates) lacks in colour, he makes up for in parental devotion. The particularly long, needle-like bill and the distinctive shape when walking, created by the combination of longer tibia, plumpish body, and long neck, are the best features to identify this species. Of the world 's three phalaropes, the Wilson's is the largest and the only exclusively American species. It nests mostly in western North America, from southern Manitoba and western Minnesota northwest to the Peace River region of British Columbia and the extreme southern Northwest Territories, and southwest to northeastern California. There are disjunct breeding populations elsewhere including Yukon, around the Great Lakes, southern James Bay, and around the Bay of Fundy. This phalarope follows a mostly Pacific route, staging at lakes in western U.S.A., to its wintering grounds in western and southern South America (Colwell and Jehl 1994).

Distribution, Abundance, and Habitat Although the Manitoba-breeding population is strongly centred on the Prairie Potholes, the species was found throughout the Boreal Taiga Plains and the Boreal Hardwood Transition, albeit thinly distributed in the Interlake and the central west. The only outlier was in a sedge meadow 30 km north of Gillam in the Taiga Shield & Hudson Plains, especially remarkable as there were no records in the Boreal Softwood Shield. There were no detections near Churchill where Jehl (2004) described this species as a "rare but regular summer visitor". The relative abundance and probability of observation both suggest a core of peak abundance in southwestern Manitoba, especially south and west of Glenboro and the Minnedosa potholes, and a lesser hotspot around Lake Manitoba. In Manitoba, Wilson's Phalaropes nest in shallow wetlands, wet alkali flats, sedge or grassy meadows, lush cattle pastures with some standing water, hay fields (perhaps especially when in proximity to wetlands), and even occasionally in wide ditches along rural roads (pers. obs). Their ability to use a variety of wetland types perhaps enables nesting in boreal wetlands, where these are shallow and have few trees, and lends support to classifying northern outlying records at the level of possible breeding. This species is believed to respond to drought with increased mobility (Colwell and Jehl 1994, The Birds of Manitoba), and could therefore have a more dispersed distribution in the province when drier conditions prevail than during the intensely wet atlas period.

Trends, Conservation, and Recommendations Although the current breeding distribution is likely a contraction of the former range after wetland loss in the 20th century (Colwell and Jehl 1994), unlike many other shorebirds, Wilson's Phalarope shows a stable trend in Manitoba and Canada since the 1970s (BBS data). Nonetheless, the reliability of these trends is low to medium, in part due to fluctuations and nomadism caused by the species' reliance on ephemeral habitat types. Migration counts point to recent declines (Donaldson et al. 2000).As with other prairie-nesting shorebirds, Wilson's Phalarope is in urgent need of better monitoring and research on its response to anthropogenic habitat change.