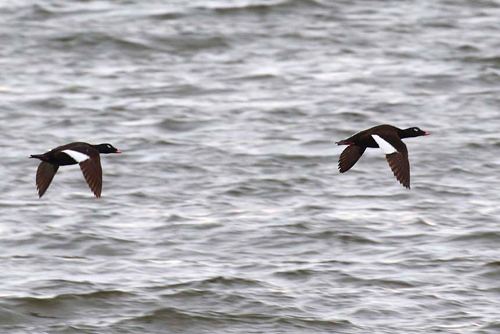 Characteristics and Range The White-winged Scoter is slightly smaller than the Mallard but 50% heavier. Males are black, with white secondaries, a small white crescent behind the eyes, and a bulky pinkish bill. Females are predominantly dark brown, with paler feathering on cheeks and forehead; they too have the white wing patch. White-winged Scoters nest from Alaska to extreme northern Ontario and also in Eurasia (European populations are sometimes considered a separate species, the Velvet Scoter). Most sources show the breeding range as extending to southern British Columbia and the southern Prairie Provinces, but this appears to be based on old data. Few birds (36 squares) were found during British Columbia's most recent atlas field work (Burger 2015). In southern Saskatchewan and southern Manitoba, traditional nesting areas on some of the larger lakes have long been abandoned, presumably at least partly due to increasing recreational disturbance (Alisaukas et al. 2010, S. Houston, pers. comm., The Birds of Manitoba). The species winters along the Pacific coast from Alaska to Baja California and along the Atlantic coast from Newfoundland to the Gulf of Mexico (Brown and Frederickson 1997).

Distribution, Abundance, and Habitat The southernmost possible breeding in Manitoba was at Long Point and two other locations on Lake Winnipeg; virtually all other records came from the northern third of the province. However, on 20 August, 2017 a female with a brood of six fully-grown young was seen at Victoria Beach, Lake Winnipeg (pers. obs.). The recent arrival of zebra mussels in Lake Winnipeg has the potential to attract scoters, which are known to feed on this invasive mollusc (Hamilton and Ankney 1994). Occupancy was 33% of squares in the Arctic Plains & Mountains, diminishing to 13% of squares in the Taiga Shield & Hudson Plains and virtually nil elsewhere. The probability of observation is over-estimated in the region west of Wapusk National Park. Up to several hundred birds, mostly males, can be seen in the mouth of the Churchill River in June and July, but this scoter is usually less common here than the other two scoter species (Jehl 2004). It is the most common scoter in the La Pérouse Bay - Cape Churchill region (Jehl 2004). It favours large wetlands and lakes of various sizes; nests are well-hidden under shrubs and are often far away from the nearest water. It may nest in high densities on islands (Brown and Frederickson 1997).

Trends, Conservation, and Recommendations Although scoters are not often shot for consumption, there is a tradition of sport hunting along the Atlantic coast of North America (Brown and Frederickson 1997). This hunting pressure, plus disturbance during the nesting season, has the potential to extirpate local populations, as appears to have been the case in the southern Prairie Provinces. The overall population status is uncertain, due to the difficulty in distinguishing this species from other scoters during aerial surveys. This scoter is vulnerable to oil spills, as it is often present in dense flocks along oil transportation routes, and somewhat susceptible to contaminants such as heavy metals as it feeds on molluscs and crustaceans (Baldassarre 2014). Although listed as Least Concern globally, it has been identified as a priority for conservation and/or stewardship in one or more BCRs in Canada (Government of Canada 2014).