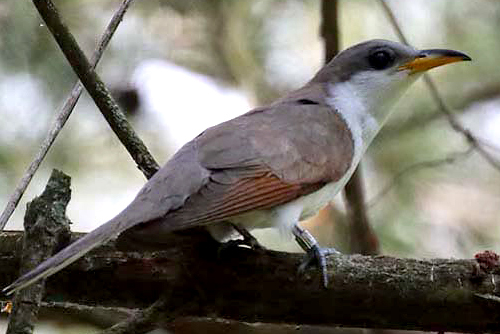 Characteristics and Range Cuckoos of the genus Coccyzus are slender, long-tailed birds with brown upperparts and whitish underparts. The Yellow-billed Cuckoo differs from its more common—at least in Manitoba—relative, the Black-billed Cuckoo, by its largely yellow bill, yellow eye-ring, more boldly marked black-and-white undertail, and especially the large amount of rufous in the wings, visible during flight. Both species are furtive, rarely allowing for prolonged, unobstructed views, their loud, decelerating call is thus often a useful identification aid. The Yellow-billed Cuckoo nests through almost the entire eastern half of the U.S.A. north into southern Ontario and Quťbec and south to northern Mexico, locally in the western U.S.A, and on some Caribbean islands. It winters almost entirely from northern Mexico to Central and South America (Hughes 2015).

Distribution, Abundance, and Habitat Only one record of Yellow-billed Cuckoo was entered in the atlas database, a bird singing during a point count near Blumenort. Manitoba is slightly north of the contiguous range of this species, where the nearest nesting records mostly come from northern Minnesota. There are only ~30 records in the province, including a solitary confirmed breeding record at West Selkirk in 1945 and a territory occupied in 1992 and 1993 at Coulter Park (The Birds of Manitoba). The preferred habitat consists of open woodland with dense deciduous cover and water nearby (Hughes 2015).

Trends, Conservation, and Recommendations Yellow-billed Cuckoo populations in general, and particularly in the western parts of the range, have seen precipitous declines during the 20th century. This species is now extirpated entirely from British Columbia, Washington, and Oregon and nearly so from California; destruction and degradation of riparian habitat is believed to be the main cause of these losses (Hughes 2015). Although there is no significant population trend in Canada (northern edge of the species' range), BBS data show a range-wide long-term decline of 1.5% annually, including a decline of 2.9% annually in the Prairie Potholes (Sauer et al. 2017). After 30 years of lobbying, the western population was finally granted protection under the U.S. Endangered Species Act in 2014 and it has a higher state listing of "Critically Imperiled" in California (Hughes 2015). The species is too rare and intermittent in Manitoba to make recommendations.