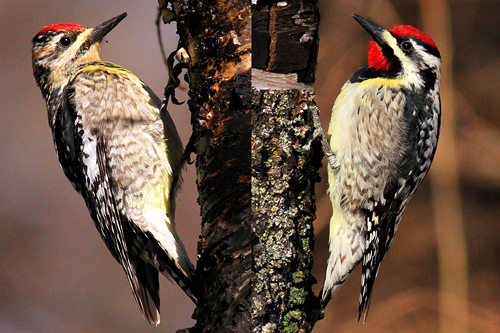 Characteristics and Range Sapsuckers are medium-sized woodpeckers, famous for drilling rows of small holes in trees to feed on sap and insects that are attracted there. These sap wells attract other species including hummingbirds.The Yellow-bellied Sapsucker is Manitoba's only sapsucker and midway in size between a Downy and Hairy Woodpecker. Adult males have a red crown bordered by black and a red throat bordered beneath by a rounded black shield. Adult females are similar but have a white throat. The belly in both sexes ranges from white to pale yellow. The Yellow-bellied Sapsucker sports a vertical white wing patch best seen on its dark folded wing. Juvenal plumage shows no red crown or black breast patch and the breast and sides are a mottled brown, although the wing patch is still evident. Nesting occurs across the boreal forest from eastern Alaska to southern Newfoundland, south into the northern Prairie Potholes, around the Great Lakes, through New England, and along the Appalachian Mountains. The Yellow-bellied Sapsucker migrates east of the Great Plains to winter in the southeastern U.S.A. and Middle America as far south as Panama (Walters et al.2002).

Distribution, Abundance, and Habitat As depicted in The Birds of Manitoba, the Yellow-bellied Sapsucker nests across Manitobaas far north as the Boreal Softwood Shield (at least to the Thompson area). Atlas records show limited occurrence slightly farther north, into the southern Taiga Shield & Hudson Plains, including probable breeding at Tadoule Lake, and possible breeding near Gillam and Shamattawa. Relative abundance was highest across the southern boreal biome, and to a slightly lesser extent in the boreal-parkland transition, and decreasing especially in the Red River Valley and the grasslands of the extreme southwest, as well as in the northernmost Boreal Softwood Shield. Probability of observation shows a broadly similar pattern with a relatively high likelihood of detections in the more treed areas of the Prairie Potholes. This sapsucker nests in deciduous or mixed deciduous-coniferous woodlands, particularly poplar, birch, and maple, and the pattern of relative abundance reflects this preference. This woodpecker readily utilises early-successional habitats and is more dependent on young forests than the snags and dead limbs that many other woodpecker species rely upon (Walters et al.2002).

Trends, Conservation, and Recommendations The Yellow-bellied Sapsucker is a common bird and has been increasing both across Canada and in Manitoba since the 1970s (BBS data). It may benefit from stewardship and management of young forest, including regimes designed to benefit the Threatened Golden-winged Warbler (The Young Forest Project 2018). The Yellow-bellied Sapsucker appears sensitive to human disturbance early in the nesting cycle and may be especially prone to collision with windows and towers (Walters et al.2002). In Manitoba, window strikes often occur when immature and migrating sapsuckers visit ornamental trees such as birch, maple, elm, and mountain-ash planted 5 - 10 metres from windows (P. Taylor, pers. obs.).