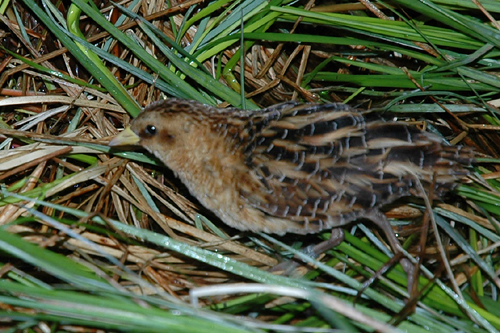 Characteristics and Range The Yellow Rail is a secretive marsh bird that is rarely seen. Those lucky enough to catch a glimpse of one in flight will recognize its tiny size and conspicuous white wing patches. More often, this species is detected by its distinctive tic-tic, tic-tic-tic call. It breeds primarily in shallow grass/sedge wetlands across central and western Canada, north to the Hudson Bay Lowlands and the southern Northwest Territories, west to the Rocky Mountains and south to the bordering Great Plains and Great Lakes states. It winters in similar habitats along the eastern and southern U.S. coastal plain (Leston and Bookhout 2015).

Distribution, Abundance, and Habitat The Atlas provides a more precise snapshot of the distribution of the Yellow Rail (2010 - 2014) than the generalized distribution depicted in The Birds of Manitoba. Although nocturnal atlassing effort was greater in southern Manitoba than in the north, Yellow Rails were frequently detected singing in the early morning, including on 137 point counts. Though the data were insufficient to calculate relative abundance, the results do show a reasonably accurate distribution pattern for the atlas period. Nonetheless, it is important to consider the ephemeral nature of the shallow wetlands and wet meadows that Yellow Rails occupy and the resulting spatial shifts in distribution and abundance that this species can exhibit under different hydrological conditions. All five years of the atlas period experienced above-average precipitation and water levels increased over that time, sometimes to the exclusion of this shallow-wetland specialist. In particular, 2010 was an exceptional summer and 70% of Yellow Rail point count detections in the south (Atlas Regions 1 - 8) were in that year, with some in ephemeral sites such as pastures. At perennial sites, such as Douglas Marsh, where numbers can fluctuate considerably over time, counts were generally low during the atlas period.

The preferred habitats of the Yellow Rail are most commonly found in Manitoba across the Prairie Potholes and the southern edge of the Boreal Taiga Plains, particularly where native prairie and parkland cover remains (e.g., central Interlake), as well as the western and southern periphery of the Boreal Hardwood Transition (within large fens such as the Brokenhead Wetland) and along the Hudson Bay coast. The lack of records across the Boreal Softwood Shield is consistent with the relative scarcity of suitable shallow wetlands in the rocky landscape of the Canadian Shield, though accessibility and effort may provide a slight negative bias. The Yellow Rail was notably absent from the forested uplands of the Porcupine Hills, Duck Mountains and Riding Mountain National Park, and the more intensively cultivated areas in the southern and western portions of the province, the latter most likely the result of habitat loss.

Trends, Conservation, and Recommendations The Yellow Rail is listed as Special Concern federally and provincially, due in part to continuing wetland loss and degradation, which remain the greatest threats to this species (Environment Canada 2013b). Shallow wetlands favoured by Yellow Rails have a much higher likelihood of being lost or degraded given the greater ease in which they can be drained, diverted or filled. Protection measures such as conservation easements and compatible agricultural land use activities, such as managed grazing and haying, that maintain the presence and integrity of shallow wetlands on native prairie landscapes, should be encouraged where feasible.