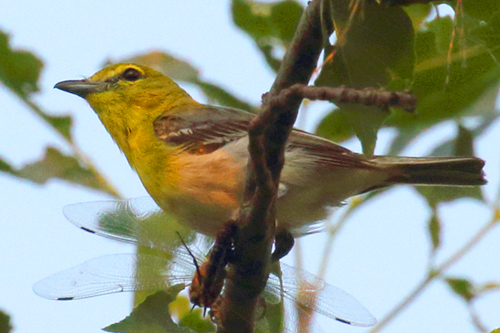 Characteristics and Range The Yellow-throated Vireo is a colourful songbird with a bright yellow throat, matching yellow spectacles, and two white wingbars. Its large size and slow, deliberate movements help distinguish it from the Pine Warbler. It is usually detected by its song, which is slower and raspier than the more common Red-eyed Vireo. The Yellow-throated Vireo's breeding range is essentially a square from Southern Manitoba to central Texas east to northern Florida and Maine, corresponding largely with North America's deciduous-dominated eastern forest. The winter range includes parts of southern Mexico, much of Middle America, and the northern tip of South America (Rodewald and James 2011).

Distribution, Abundance, and Habitat The Yellow-throated Vireo reaches the northwestern limit of its breeding range in southern Manitoba. It is restricted to the southern fifth of Manitoba with the northern and eastern limits defined by the edge of the boreal forest. Atlas results differ little from the range estimated in The Birds of Manitoba; however, both show this species' range extending farther northwest (to the Swan River area) and more contiguous than depicted in Rodewald and James (2011). The majority of sightings occurred across the treed sections of the Prairie Potholes (detected in 32% of surveyed squares) and in the boreal-parkland transition (i.e., the southern edge of the Boreal Taiga Plains and the western edge of the Boreal Hardwood Transition). The relative abundance was highest in two areas of southern Manitoba that are separated by the intensively agricultural Red River valley: the southernmost Boreal Hardwood Transition and the Pembina River valley region of the Prairie Potholes. This species prefers large mature deciduous trees in river-bottom forests, urban parks, or mature aspen and oak woods (The Birds of Manitoba). Although often considered uncommon in Manitoba, atlas results suggest that it is widespread and locally common where suitable habitat occurs.

Trends, Conservation, and Recommendations BBS data suggest a significant increase in Manitoba since 1970 and general stability in Canada. Despite this increase, the clearing of riparian and other tall forests for agricultural and urban expansion can impact this species. This species is worthy of consideration in urban planning because its continued presence in cities and towns such as Winnipeg and Brandon appears linked to the maintenance of large greenspaces with mature woodland.